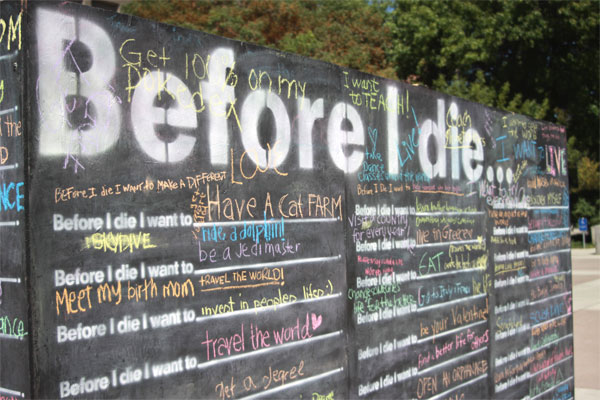 Norma Loya Students wrote goals they hope to accomplish before they die on a chalkboard in the SSC plaza last week.

Given chalk or a piece of paper, students shared their aspirations and wrote words of encouragement for their peers last week during Suicide Prevention Week.

Chico State held several events to bolster the countywide effort to increase public awareness of depression and suicide from Sept. 9 to Sept. 14. UMatter, a positive mental health initiative at Chico State, held several events for students on campus, including a “Before I Die” wall and a “Don’t Sit in Silence” display.

Juni Banerjee-Stevens, a counselor and  a California mental health services authority program manager, sits on the Butte County Suicide Prevention Task Force. She got involved with Suicide Prevention Week to bring the topics of mental illness and suicide “out of the closet,” she said.

“Chico State has seen more than its fair share of student deaths in recent years,” Banerjee-Stevens said. “Whether these deaths were the result of suicide or not, it’s important that we do whatever we can to address any mental health concern that might be leading to risky, even potentially lethal behavior.”

Suicide Prevention Week let students know that there are many resources available to them if they need help.

“About one in 20 people in America will think about suicide at some point in their lives because it’s part of being human,” Banerjee-Stevens said. “If we can talk more openly about our thoughts and feelings, we are less likely to fall into a state of despair that we can’t escape.”

One of the most popular activities that took place was the “Before I Die” wall. From Monday through Wednesday, students could be seen standing in the Student Services Center Plaza writing their goals on an enormous black board and reading the goals of their peers.

Ariel Ellis, a first-year graduate student in the psychology program, is a UMatter program assistant who helped put on this particular event.

The inspiration for the wall came from the second annual Care Enough to Act Suicide Prevention Summit that took place in March. Ellis said many people wanted an event like this on campus because it would give students an opportunity to think about their lives and discover their dreams.

“I feel that seeing other people’s aspirations can be inspiring and eye-opening,” Ellis said. “I have seen a ‘Before I Die’ wall in person. The initial impact of the wall was powerful and the lasting impression continues to be thought provoking.”

Students were more than happy to write on the wall.

Junior sociology and women’s studies major Kory Acosta liked the wall because it made people think about their own condition and encouraged people to reflect on the lives of others.

“It makes you want to move forward and want to really achieve your goal which many not be very tangible but it’s still something that you want to work towards and it gives you a reason to be and go on,” he said.

After writing their dreams down, several took pictures or walked around and read the dreams of other students.

Banerjee-Stevens’ husband designed and built the wall. He painted the wooden wall with chalkboard paint and spray painted the stencils that came from the “Before I Die Toolkit.” Students were able to write on all four sides with colorful chalk.

“Don’t Sit in Silence,” another anti-suicide event, took place on the lawn near the George Peterson Rose Garden Thursday and Friday.

Filled with 110 chairs, the “Don’t Sit in Silence” display represented just one tenth of the number of college students who lose their lives to suicide in the U.S. each year. The chairs symbolized the number of chairs that would be vacated by suicidal students after their deaths, and many were labeled with real personal stories that community members contributed in honor of loved ones who were lost to suicide.

Students had the opportunity to leave words of encouragement for their peers on a poster that said, “What would you say to a friend who was struggling?” The goal of the display was to encourage students to speak up, reach out and get help.

Other events that took place throughout the week included a workshop called safeTALK, three short films that depicted mental illness and an “Out of Darkness” Walk through downtown.

The responses to the “Before I Die” wall and other activities thrilled the UMatter team, Ellis said.

“The ‘Before I Die’ wall made national news,” Ellis said. “We were told people in Texas and Florida saw the Chico State wall featured in their local news.”

Overwhelmed by the support they received at their events, Ellis said the team looks forward to bringing more eye-catching and eye-opening events to campus.

The team was also blown away by how altruistic Chico State’s students are, Banerjee-Stevens said.

“Knowing that students want to make the most of their lives — even those who may be struggling to find their purpose right now — is a terrific shot in the arm for me.”

Nicole Santos can be reached at [email protected] or @Iam_NicoleS.