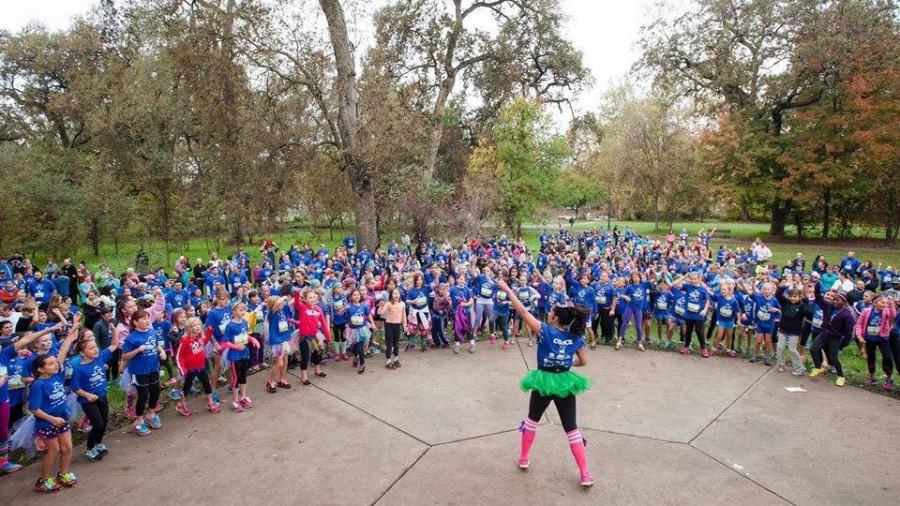 Brittany Kissinger, Chico State Alumn, warms up the crowd for Girls on the Run with her zumba dance moves.

From the classroom to the stage, Brittany Kissinger is a force to be reckoned with.

Kissinger graduated from Chico State in 2011 with a degree in liberal studies. Since then, the 25-year-old has completed Chico State’s credential program, landed a kindergarten teaching position, brought her Zumba dance moves to multiple charity events in town and competed to become Miss California USA.

On Jan. 9, Kissinger arrived in Long Beach to compete in the pageant representing her hometown as Miss Chico. That experience allowed her to have a voice and express her future dreams and goals, she said.

“I found pageantry as a way to not only have this performer side where I get to do dances and be on stage, but then also to have a voice and a brain,” Kissinger said. “A lot of people don’t know that part of it. I studied every single night for two hours, on top of life, on current events.”

Jumping into the pageant world opened up her eyes to more possibilities.

“I feel like it made me really aware of the world and it allowed me to collect my thoughts,” Kissinger said.

Outside of her pageant life, Kissinger has also been actively involved in charity events including Relay For Life and Girls On The Run. Pumping up the crowd and warming them up through Zumba dancing is what she does best.

“Zumba is for everybody; any language, anyone who wants to come and dance can do it,” Kissinger said.

Kissinger also volunteered to be on the board of the National Down Syndrome Society. Since volunteering, she has gained memorable experiences and has showed children that having a disability doesn’t stop you from dancing and having fun, she said.

“It was the most amazing dancing experience I’ve ever had,” Kissinger said. “This one lady reached out to me and said, ‘you don’t know me, but my daughter has Down syndrome, and you were at the buddy walk last year. You danced with my daughter. I got a picture of it, and she looks at it all the time.'”

Additionally, being in the classroom and having a younger sister in middle school has exposed Kissinger to the issue of bullying through social media.

BrittanyAgainstBullying is a social network account on Instagram that Kissinger created to share her positive thoughts, stories and proactive ways to become a good friend. Her goal is to eliminate as much bullying as she can and make a difference in teens’ lives, she said.

“I feel like it could start something,” Kissinger said. “Random people I don’t know from other states have told me, ‘I love this account, and I love that you are trying to help people.’”

Her next dream to conquer is starting a nonprofit organization aimed at young children to help educate them in a healthy lifestyle while also incorporating fitness. Although she has her fingers in a little bit of everything, Kissinger’s true passion is her students.

“My number one priority is my kindergarten class, so I never let how tired I am affect them,” Kissinger said.

This Sacramento native now lives here in Chico and continues to find new ways to get involved in the community.

“If I continue being proactive and getting out there, somebody’s going to hear my ideas.” Kissinger said. “What I realized is, I can do anything.”

Claire Martinez can be reached at [email protected] or @clmartinez on Twitter.