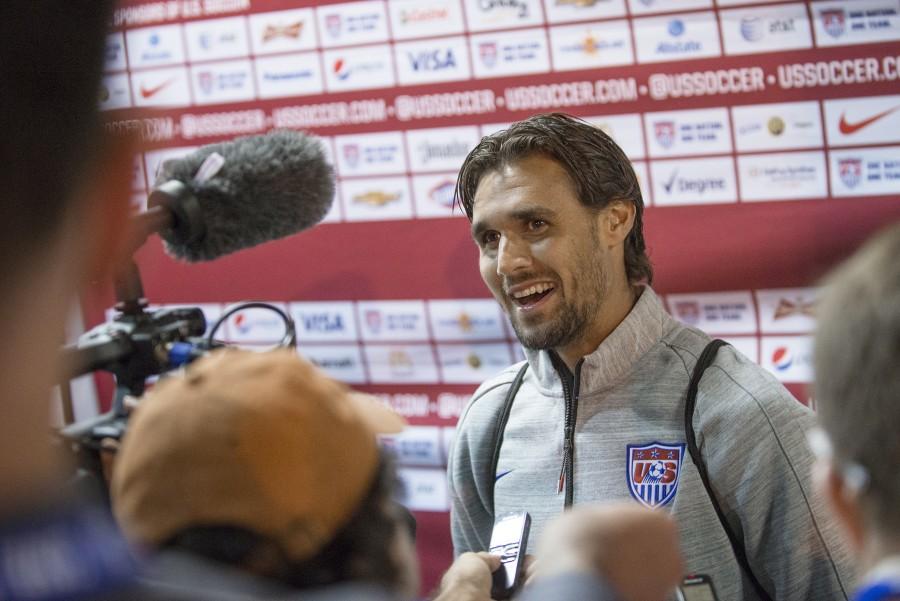 Former Chico State student Chris Wondolowski talks to the media after playing for the U.S. Men's National Team against Azerbaijan at Candlestick Park in May 2014. Photo Courtesy Jason Halley/University Photographer.

Seven months after debuting as a rookie last summer in the 2014 World Cup, former Chico State men’s soccer player Chris Wondolowski has returned to the national team once again, this time as a veteran player.

Not only is Wondolowski becoming a regular in the national scene, but he is a potential leader to take the reigns and show the way for incoming players.

“It was a whirlwind,” Wondolowski said about his experience playing in the 2014 World Cup.

“Listening to the national anthem against Ghana before our first game still, to this day, gives me goosebumps,” he said.

The United States Men’s National Team had numerous goal-scoring opportunities to tie the score in the last match against a strong Belgium team, including a missed opportunity by Wondolowski.

According to Wondlowski, the last game the national team played against Belgium in which he missed a pivotal goal was frustrating weighed heavily on his mind.

“I will always think about it,” he said.

Mike O’Malley, who was Wondolowski’s head coach while playing for Chico State’s men’s soccer team, said that he felt the weight of the moment, too.

Making and missing goals is just a major part of the sport, Wondolowski said.

According to Robby Busick, Wondolowski’s former Chico State teammate, it was arguably one of the the biggest misses on the biggest stage.

“Most people wouldn’t be able to get out of their room, but he takes it and he goes back to his club and scores goals,” Busick said.

It was a true testament to him as a player and more importantly, him as a person, Busick said.

After the World Cup, Wondolowski rejoined the San Jose Earthquakes, his MLS club team, in the second half of the regular season. He came back tallying up nine goals and four assists.

Out of the entire U.S. team, Wondolowski performed the best within club play after the World Cup, Busick said.

Wondolowski ended the season as the top goal scorer for the San Jose Earthquakes with 14 goals and four assists.

According to O’Malley, aside from Wondolowski being a goal scorer, he is on the national team because he is a role model for younger players joining the team.

He has an unbelievable work ethic and will contribute that to every single minute of every practice making him a desirable player and teammate, O’Malley said.

“Once a coach looks at Chris day in and day out, you want him on your team,” O’Malley said.

Wondolowski is hoping on playing a bigger role in the national team this year, he said.

“My goal was to make the January camp. Now, my next (goal) is to try and make the Gold Cup team this summer,” Wondolowski said.

He said that his role within the team is evolving and he finds himself in veteran shoes.

In terms of being in the U.S. team’s future, Wondolowski hopes to continue to be on the national team and attending the camps. But for now he is looking to complete the training camp and take his career day by day, he said.

O’Malley and Busick have no doubts that Wondolowski could make the team roster for the 2018 World Cup, which is set to take place in Russia.

“I’m going to make a bold statement. I think Wondo is going to be on our next World Cup team,” O’Malley said.

Wondolowski is 31 years old and has kept himself physically and mentally healthy and will have no problem being part of the national team in the future, O’Malley said.

“I think he is going to be pretty much at the peak of his career,” he said.

Aside from being physically and mentally fit, Wondolowski has a competitive drive that few people have, according to O’Malley and Busick.

“In the four years that I coached him, I think he might’ve lost five wind sprints in our fitness trainings,” O’Malley said.

Not only did his time at Chico State keep Wondolowski fit, but he said Chico has been a very important part of his life as a soccer player and as a person. The connections he made while he was a Wildcat has stayed with him to this day.

“I absolutely loved my time at Chico and that’s why I have so many lifelong friends that I still talk to,” Wondolowski said.

He said that playing in the California Collegiate Athletic Association conference has taught him how to compete in every game.

If he were to give aspiring athletes some advice, it is important to love what you do, he said.

“Enjoy what you do. Love it because that’s what matters. If you love the sport then you will do whatever it takes to get better at it day in and day out,” Wondolowski said.

Dylan Wakefield can be reached at [email protected] or @dylan_wakefield on Twitter.