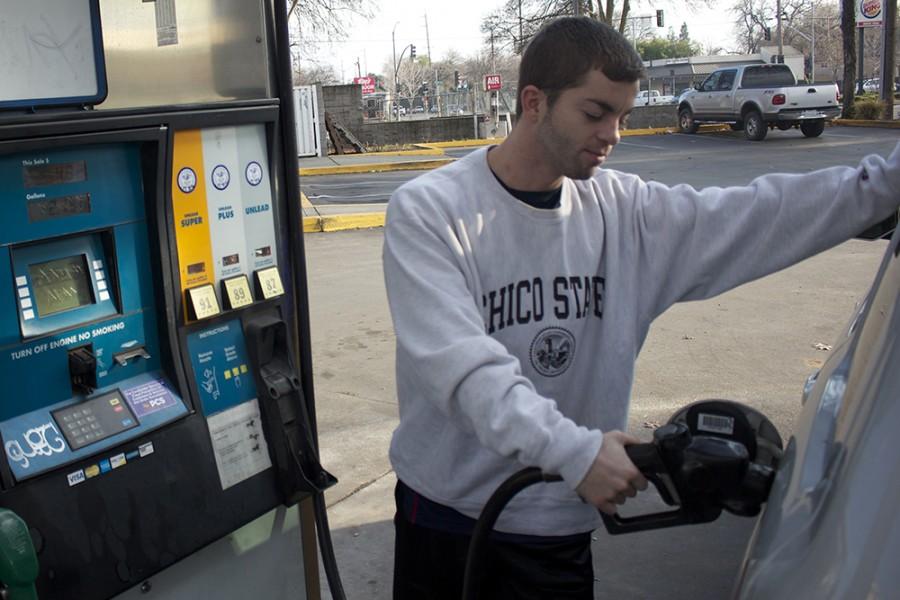 Chico State senior Michael Belcher fills up his tank at a gas station on Walnut Street. OPEC has not cut back on crude oil production yet so prices have remained low. Photo credit: Gustavo Ornelas

Surprisingly, not much has changed this year when it comes to gas prices. Californians still have the luxury of paying between $40 and $60 to fill up their tanks.

Although prices were expected to increase in January, the AAA Fuel Gauge Report says that Chico area gas prices are still on the decline, except for a daily spike of 3 cents on Jan. 6 to $2.65 for a gallon of regular gas.

The current average price for California’s regular gas is $2.57 while the Chico and Paradise region’s average price sits at $2.41 a gallon as of Jan. 15.

Paying lower prices at the gas pump is delivering significant savings to consumers. Chico resident Steve Jungen, 51, saw his cost for a tank of gas cut nearly in half, he said.

“It’s awesome,” Jungen said. “Before the gas prices started to dive, it took me around $80 to fill up.”

Jungen spent $45 for a full tank of gas that day.

Before the New Year, many were worried about gas prices rocketing after the announcement of the California cap-and-trade Program.

On Jan. 1, the California Air Resources Board extended the regulations from industrial and electric power plants to include fuel and gasoline distributors, causing them to be held responsible for their carbon emissions. Regulated companies now have to purchase allowances that account for one metric ton of carbon emissions and greenhouse gases.

California’s goal is to cut back on these emissions and gases, said David Clegern, a California Air Resources board representative.

“The California cap-and-trade is basically going as planned with the price of compliance being low,” Clegern said.

The effect of cap-and-trade on California gas prices should be minimal, Clegern said.

“We didn’t expect it to have much of an impact on prices. If anything it would be something under 10 cents,” he said.

In effect since 2013, the California cap-and-trade program is expected to reduce the amount of greenhouse pollutants by more than 16 percent between the years 2013 and 2020, according to the Center for Climate and Energy Solutions.

But some oil and fuel distributors are not as pleased with the regulations.

The cap-and-trade program is a burden to California taxpayers and is poorly instituted, said Jack Reiser, president of Redding Oil Co.

“We need to put money into our roads and highways,” Reiser said. “Things like this could drive business out of America.”

Redding Oil Co. is one of the many businesses now regulated by the recent extension of the cap-and-trade program. According to the Center for Climate and Energy Solutions, California cap-and-trade covers about 360 businesses that are fuel wholesalers.

However, the most significant factor driving the cost of gas is the price of oil, said Gordon D. Schremp, senior fuel specialist at the California Energy Commission.

“As consumers are now seeing, the biggest contributor to gas prices is the price of oil, which has dropped more than 40 percent since last June,” Schremp said. “Gas prices at the pump continue to fall because the price of crude oil continues to fall.”

Experts at the Energy Information Administration predict that OPEC crude oil production will increase this year to 29.9 million barrels per day, compared with the 29.87 million barrels per day they produced in 2014. So until the supply being produced by OPEC decreases, which will drive prices up, gas here in the U.S. should remain on the cheaper side.

Michael Arias can be reached at [email protected] or @theorion_news on Twitter.