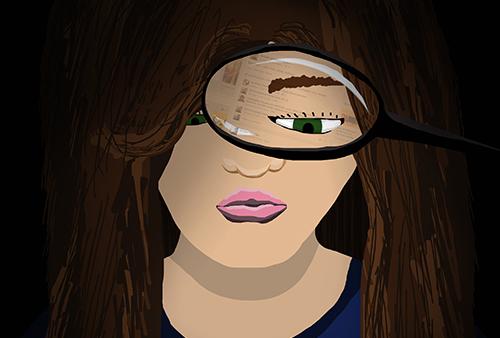 I can say with certainty that snooping on other people is a bad idea, especially under the influence.

It seems like a good idea at first. I mean, it’s an opportunity to get to know about a person’s life, right? Whether it’s a potential love interest, an ex or someone who is talking to one’s man or woman, the urge to snoop is just there.

The urge is even greater with the encouragement of friends.

Well thanks to them I thought it was a good idea. I would scroll through the posts of the person I was interested in without leaving any trace.

No liking, commenting or sharing.

Sooner or later, I’d be all the way back in 2012, stalking their blog posts and wondering if our parents would get along.

Everything was going fine. I learned about things that definitely helped me understand what was going on and where I stood in their life.

It was all working out — up until I got caught.

Yes, the worst thing that could happen to any person who snoops on other people happened, accidentally hitting the follow button. Letting them know that I’ve been looking through their stuff and how creepy I am because of that.

Now keep in mind that I didn’t know I had followed this person until the very next day. By then it was too late to really do anything. All I could do was yell and curl up in a hole and die of mortification.

But no, I didn’t stop there. Not only did I say every curse word imaginable, I proceeded to go ahead and delete my account. Not that it changed anything of course, but I felt that if I were to delete my account then I could pretend that this whole incident didn’t happen. It was all just a nightmare.

How silly of me.

It was at that moment that I realized just how wrong it is to snoop on other people. I thought I wasn’t harming anyone, but I realized that at the end it was just me that I was hurting by reading stuff about this person’s life.

Getting caught made me realize that sometimes it’s better not knowing so much about someone if they don’t want me to know. That in time I could have learned about this person’s past and thoughts if only I would have had a little faith in them.

Snooping on people definitely has had its benefits, but next time I think I will ask myself if I really want to know everything about this person, whether or not I would be able to handle the information or if it’s worth getting hurt by knowing their true feelings.

But next time, I’ll be sure not to get caught.