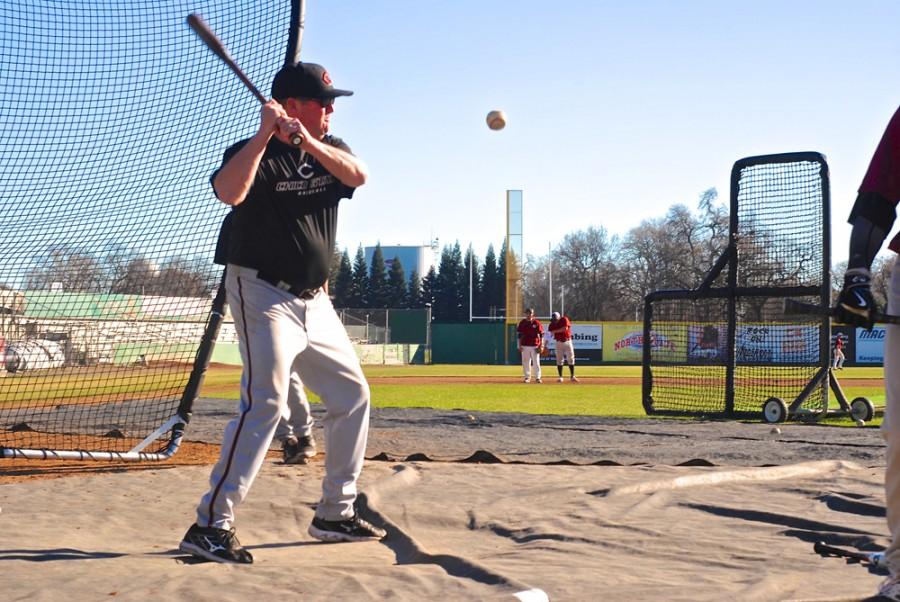 Dave Taylor keeps the team on its toes with fly balls and grounders during practice on Friday. The Wildcat baseball team is looking to make it to the Division II College World Series for the second year in a row. Photo credit: Zach Aucella

The taste of sunflower seeds, the smell of pine tar and the sweet sound of the crack of a bat; it’s baseball season.

The players are eager to get back into action as they hope to build on their success from last year. The ‘Cats are seeking their second consecutive appearance in the Division II College World Series and a second-straight West Regional title.

Senior shortstop Cody Slader, who will be a key leader for the team on its quest to get back to the College World Series, said that winning the West Region was something that meant a lot to him.

“(It was) probably the best moment of my life, and a lot of people can agree from the last team, the same thing,” he said.

Dave Taylor, the baseball team’s head coach had nothing but praise for his squad from last year.

“Last year’s group was special,” he said. “Very close-knit group and the guys played for each other.”

Taylor hopes that this team can build the same kind of bond this season, he said.

Here are some things to look out for as the season gets underway:

Key Returners: Some key returners for the Wildcats this season include Slader, a National Defensive Player of the Year, and First Team All-American closer Luke Barker. Slader and Barker’s former teammate Nick Baker said that he expects both guys to be the leaders of the team.

“They have the experience of winning and know what to expect to get the job done,” Baker said.

Last year Slader, who was a transfer from San Diego State, hit .273 with 21 RBIs and led the team in stolen bases with 19. He also had a fielding percentage of .978.

Barker, a Chico native, finished last year with 2.18 ERA and 18 saves, good for a 4-3 record. Taylor said that Barker could possibly get promoted to a starting role this season.

Key Newcomers: True first-year Cameron Santos could possibly be the starting second basemen for the team. Santos, a standout at California High School in San Ramon, was a two-time First Team All-East Bay Athletic League selection and Cal High Male Athlete of the Year. In his senior year, Santos hit .412 and stole 15 bases. Taylor said that he hopes to get Santos opportunities this season.

Also looking to make an impact on the mound for the Wildcats this year is true first-year pitcher Hunter Haworth.

Haworth graduated from San Benito High School with solid scouting reports. With his fastball in the low to mid-80s, scouts said that he had the confidence to throw any of his four pitches in any count. Slader said that Haworth is a strong pitcher who throws a lot of strikes.

Taylor also said that Sonoma State always seems to play them tough. Both Baker and Slader said that the Seawolves are their biggest rival, presenting a challenge every time they play. The Wildcats will host Sonoma State Feb. 27 and 28, and the finale will be at Raley Field in Sacramento on Feb. 29.

The ‘Cats are set to kick off their season on Feb. 6 when they face Saint Martin’s University at home.