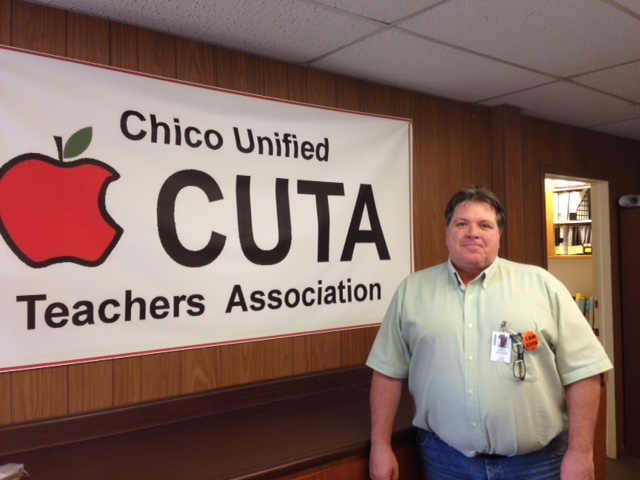 Kevin Muretti, president of Chico Unified Teachers Association, has been leading the picketing in front of the local schools. Photo credit: Michael Arias

Members of the union came together and picketed in front of Chico High School on what was termed Unity Day on Jan. 14, which was the date of the second mediation session.

Kevin Moretti, president of the union, said that Unity Day was just the beginning.

In response to the district’s disapproval of their salary requests, Moretti and his association will be picketing in front of every district school once class is out on every Thursday until their message is heard.

It has been seven years since the district has adjusted their pay scale, Moretti said.

The Chico Unified Teachers Association is asking the district for an 8 percent salary increase and full payment of medical insurance premiums.

According to the California Department of Education, the average salary for public school teacher in California is $69,000.

Kevin Bultema, assistant superintendent for business services at Chico Unified School District, said that the average salary for public school teachers in Chico is about $65,000.

According to Bob Feaster, human resources assistant superintendent at Chico Unified School District, the district is receiving about $6 million in new monies from the Local Control Funding Formula program this school year.

On Nov. 20, the school district released a fact sheet stating that they were receiving 10 percent more funding this year.

With the help of the Local Control Funding Formula program, the total budget revenue this school year is $105 million, Bultema said.

With the budget in order for the school year, the district is offering the union a 2 percent salary increase, an extra $35 a month for their health care premiums and $93,000 in one-time monies to the association, according to the district reports released last December. The district will also be increasing the teacher’s premium from $950 a month to $985 a month

“I don’t agree 2 percent is a fair offer that makes up for the past seven years,” Moretti said.

Contesting the union’s disapproval, Feaster said that the 8 percent the association is asking for will cause bankruptcy.

“We can’t give all the extra monies we have to the CUTA,” Feaster said. “This additional money we are receiving gets us to where we were in 2007 before the recession hit. We are just now getting even.”

The union and the district are headed into their third mediation meeting on Tuesday in hopes of coming to an agreement on the matter.

Michael Arias can be reached at [email protected] or @theorion_news on Twitter.