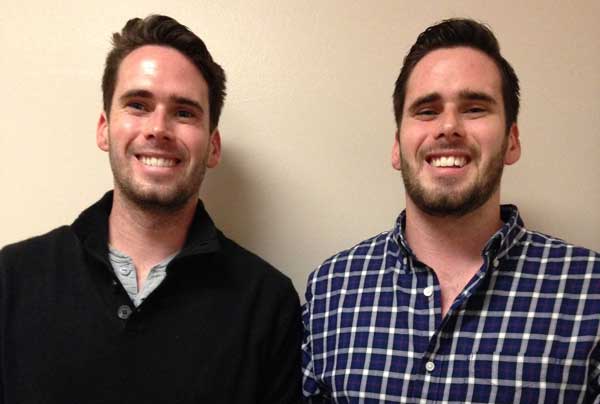 Danny (left) and Tim Gau said that their time at Chico State has had a significant on their lives, especially through their fraternity and their family's history with Chico. Photo credit: Nicole Santos

Danny (left) and Tim Gau said that their time at Chico State has had a significant on their lives, especially through their fraternity and their family’s history with Chico. Photo credit: Nicole Santos

The Orion sat down with the twin brothers to ask them about their involvement with Alpha Sigma Phi, and what Chico State has taught them outside of the classroom.

The Orion: Why did you decide to go to Chico State?

Tim: Well, we kind of have a history with Chico. Technically we are like (the) fourth generation to come to Chico. So it’s just kind of been a home away from home because we’d come up here quite often when we were growing up.

Danny: My great-great-grandma, great-grandma and grandma lived in Chico. While my grandparents, aunt, mom and older brother attended school in Chico.

What has it been like going to the same college?

Tim: It’s been fun. I mean, we’ve never not gone to school together. We never planned like, ‘Hey, we’re gonna go to college together.’ It was, ‘you apply to whatever you want, I’ll apply to whatever I want, and we’ll just kind of see what happens.’

Danny: San Diego State was my No. 1 (choice). It was my reach. But I wasn’t disappointed when I heard I didn’t get in. Definitely more excited when I heard I got into Chico. We’re very close with our older brother too. He was a senior when we were freshmen at Chico, and he was a founding father for Alpha Sig, so that definitely helped our influence in joining the fraternity.

How has Alpha Sigma Phi impacted your college experience?

Tim: I mean, I took this opportunity, seeing through my older brother that if you do the right things in a fraternity you can get a lot out of it. I saw the change, the positive change my brother had, and I was like I’m going to do the same thing that he did and I know I’ll be a better man out of it.

Danny: Just the fact that you want to be the best person possible, even at this early age. Because you never know who you’re gonna meet and you want to be able to represent the best self of you and the organization that you are representing.

The fraternity is like a Swiss army knife. There are so many tools you can use. It’s hard to dwindle it down to one aspect.

What has Alpha Sigma Phi taught you?

Tim: Alpha Sig has taught me a lot of public speaking, how to professionally dress myself, proper event planning and interpersonal skills.

Danny: The fraternity taught me to be versatile and to be a well-rounded individual. You know you want to be able to offer people all sorts of attributes and be adaptive.

What are some of your best memories at Chico State?

Danny: My favorite memory was actually when we initiated my dad into the fraternity. Our older brother, who actually works for the national headquarters, is a recruiter, and he came and surprised us at the initiation. It was a very powerful memory and family affair.

Tim: I think the fraternity honestly has provided a lot of good memories (even if) it’s just waking up really early and doing a service event with my brothers and then afterwards hanging out. I mean my brothers both being here was a lot of fun too. We had that opportunity to be at Chico and be in Alpha Sig all together.

How has Chico State helped you be successful over the past four years?

Danny: One thing I love about Chico State is how socially excellent people are. You can talk to anyone. Everyone’s just so interpersonal and able to talk and able to socialize. If you go to a UC school, you’re in a classroom of 500 people. You won’t even meet your professor. Our professors have doctorates and stuff, and we have that personal relationship.

Tim: I’m kind of excited to start the interview process and talk to other companies. And when they ask me, ‘Oh, you got your degree at Chico State? Yeah, you had some fun.’

I’m excited like, ‘Yeah, I had fun, but did you see all this stuff that I did too?’

I’m very proud to have a degree from Chico because I know it’s provided me an environment where I can be social but at the same time work really hard and get a good degree.

Do you have any advice for students at the university level?

Danny: Get involved so you can meet other people and have a sense of pride of something, so when you graduate you can take away something like, ‘I did so much work for that, and I’m proud of it.’

Tim: Leaving your legacy, whether it’s Greek life, a student organization or Associated Students. Get involved from the get-go. Really branch out and don’t do what’s comfortable. Do something that you know is going to challenge you and make you a better person.

At the end of this semester, Danny will graduate and is going to return to the summer internship he held last year at the Marine Biological Laboratory in Massachusetts. He also plans to travel in Europe with some friends.

Tim has one final semester this fall, and after he graduates he would like to travel before starting his career.

Nicole Santos can be reached at [email protected] or @Iam_NicoleS on Twitter.