Men could learn a lot by taking women’s studies classes 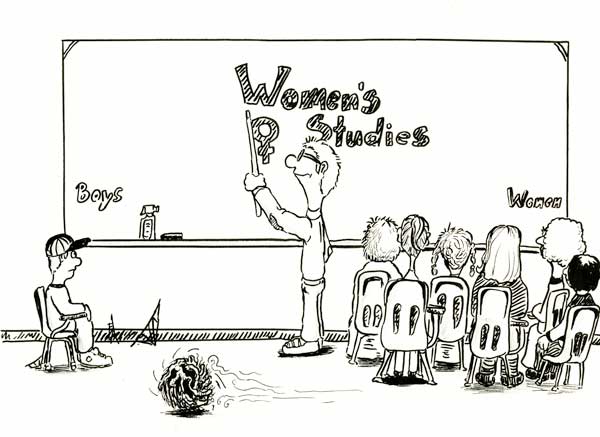 I walked into the first session of my “Women’s Health” class this semester and again experienced disappointment. Besides me, there was one other guy in the room.

I’ve taken four classes in women’s studies. The only class that had some balance between the number of men and women was a hybrid journalism course called “Women, Men and Media.”

What is up with straight guys not taking classes in women’s studies? I sat down for close to an hour and thought about that very question.

Do men not care about women?

Is it men trying to respect women’s spaces?

The issue is not with women, but with men and perceptions of masculinity. Somehow there is a quality of being less manly should a guy take a women’s studies class. I already see men being teased about not “manning up.”

Men don’t want to be seen as “pussy whipped” or gay. No one is going to castrate guys in a women’s studies class.

I get it. Guys need to be seen as tough, macho, in control and in charge.

Men should consider that taking a women’s studies class or attending an event might make them better men.

The Gender and Sexuality Equity Center had a sex-positive event last year. One of the presenters was the nationally renowned sexologist Dr. Carol Queen. During her presentation she gave step-by-step instructions on how to find the clitoris, the sensitive female erogenous zone.

Men in the audience were laughing and giggling rather than taking notes. I don’t understand how those men wouldn’t want to learn more about what turns on a female partner. I’m gay, and I was actually irritated about it.

Women are often the targets of catcalling. Yet despite their own discomfort with it, men don’t speak up. Women are sexually assaulted at alarming rates in our country. Women who are liberal and open about their sexuality are shamed while we figuratively add another tally mark to our headboards.

Men should realize that the subjects of these classes are their mothers, sisters, aunts, grandmas and maybe future wives and daughters. If they’ve ever wondered why that girl they think of as cute doesn’t think the same about herself, take a class.

There is nothing wrong with a man taking a class that focuses on women.