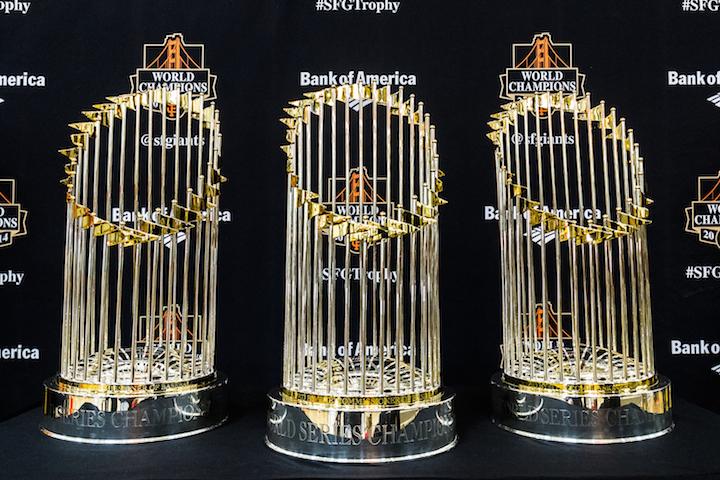 The San Francisco Giants' World Series championship trophies on display at Aaron Ray Clark Memorial Field House in Chico on Jan. 31. Thousands of fans showed up at the event to get a glimpse of and take photos with the trophies. Photo credit: Trevor Ryan

The event brought out clusters of fans dressed in orange and black from around the Chico area to take part in the Giants’ World Championship Trophy Tour.

Spectators covered the outside parking lot of the building and stretched far into the nearby grass field, doubling the number of attendees from the last time the trophy was in town.

“Last time we didn’t even make it to the grass, and we’re well past that grass section,” said Erin Gonzales, recreation supervisor at the Chico Area Recreation and Park District.

About 1,500 people were present the last time the Giants came to Chico, but this year the number of attendees reached about 3,000, Gonzales said.

The doors of the gymnasium were set to open at 2 p.m. to allow fans in, but people started lining up outside as early as 6 a.m., according to Gonzales.

Chico State senior Kyle Fales said that he arrived at noon to wait for his chance to see the trophies for the first time.

“I’m excited,” he said. “I went to the actual NLDS game when they clinched (the Series). So it was pretty exciting to see the entire process run out. And now I get to see the trophy here in Chico.”

The tour came to Chico because of the city’s Junior Giants program, Gonzales said.

The program provides free summer baseball to kids ranging from kindergarten through the seventh grade. Fans at the event who donated a minimum of $2 to the program received a commemorative Giants button.

The tour marks the third time in five years that the World Series trophy has come to Chico, mirroring the Giants’ championship success. The previous trophy visits were in 2011 at the City Plaza and in 2013 at Aaron Ray Clark Memorial Field House, the same location for this year’s visit.

The tour makes its way throughout various cities in California with one stop each in Nevada, Oregon and New York.

While this marked the first time most fans got to see the trophies in person, some make a point of never missing one of these stops.

Erisman was a high school students when she attended the trophy tour stops in 2011 and 2013.

“It went real quick, but I could feel the magic in the trophies,” said Erisman’s mother, Karen Erisman.

Genevieve Erisman said she expects to be back in two years, following the trend the Giants have set in recent years of winning the World Series every two years. Her mother hopes to see a break in the trend and be back to see the trophy next year.

Dariush Azmoudeh can be reached at [email protected] or @dari_d on Twitter.