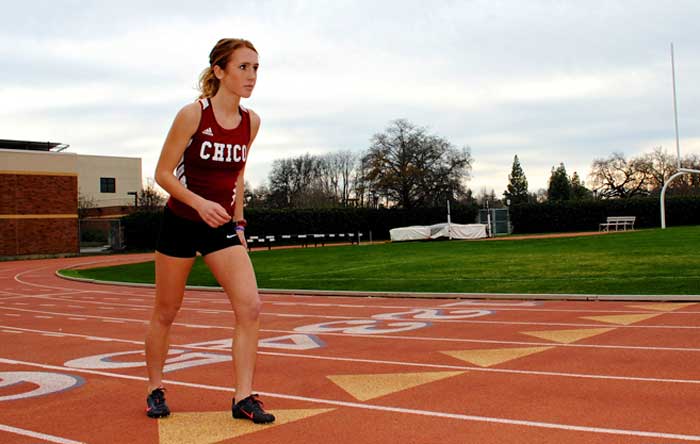 Julie Finn, junior on Chico State's cross-country and track and field teams, sets up to practice for the 1500-meter event. The spring semester means a change in landscape for competitors as races and events move to the track. Photo credit: Zach Aucella

Runners on your mark. Get set.

The switch over from cross-country to track and field season is quickly creeping up.

With both the Wildcat men’s and women’s cross-country teams placing in the NCAA Championships this past fall, the ‘Cats are ready to bring their energy into track and field competition.

All the work the team accomplished in the fall will hopefully follow through into the track season, making for more capable and stronger athletes, said Gary Towne, head distance and cross-country coach.

The differences between cross-country and track are the numerous amounts of laps around the track, while cross-country has different courses for runners to race on, Towne said.

Sophomore Falco DiGiallonardo, who runs the 1500- and 5000-meter races, said that he agrees with Towne on the difference between the two.

“It’s smoother on the track, and you don’t have to worry about hills,” DiGiallonardo said.

Different terrains play a big part when it comes to running. Track athletes can go faster due to the flat surfaces, DiGiallonardo said.

In cross-country, a top seven runners stand out on both the men’s and women’s side and represent the team in meets. The athletes who are not in the top seven have the opportunity in track and field to showcase their skills, Towne said.

“It’s so nice to see the athletes shine and the opportunity to merge,” he said.

Runners can be seen practicing at Bidwell Park throughout cross-country season. While preparing for track and field, the team spends time on speed-related workouts to focus on the shorter distances they compete in.

the team has also been spending more time in the weight room, Towne said.

Assistant coach Sean Smith put together a weight training program with the athletes that they have been working on to prepare for the season.

School record breaker for the 800-meter race, junior Olivia Watt, who finished off her cross-country season with the 5k and a personal record of 18:09, said she enjoys the different aspects cross-country and track have to offer.

“Both are fantastic,” she said. “Cross-country is a little more team directed because we’re scored as a team. With track, we mix in with the throwers, sprinters, jumpers. Our team is one big unit.”

Participating in cross-country has helped Watt prepare for track season because she has the advantage of having competed in the fall, she said.

“Cross-country gives you a good base,” Watt said. “Going from super-high mileage, we come into the track season with a lot more behind us.”

The cross-country runners had just a two-week break once their season was over in December to begin training for track. The team has been practicing for the past couple of months to prepare for spring competition.

Towne said he is looking to help his athletes develop and become stronger. He wants to bring the accomplishments from cross-country onto the track.

“It’s going to be exciting to see what we can accomplish both individually and as we begin to pull things together for the team,” Towne said.