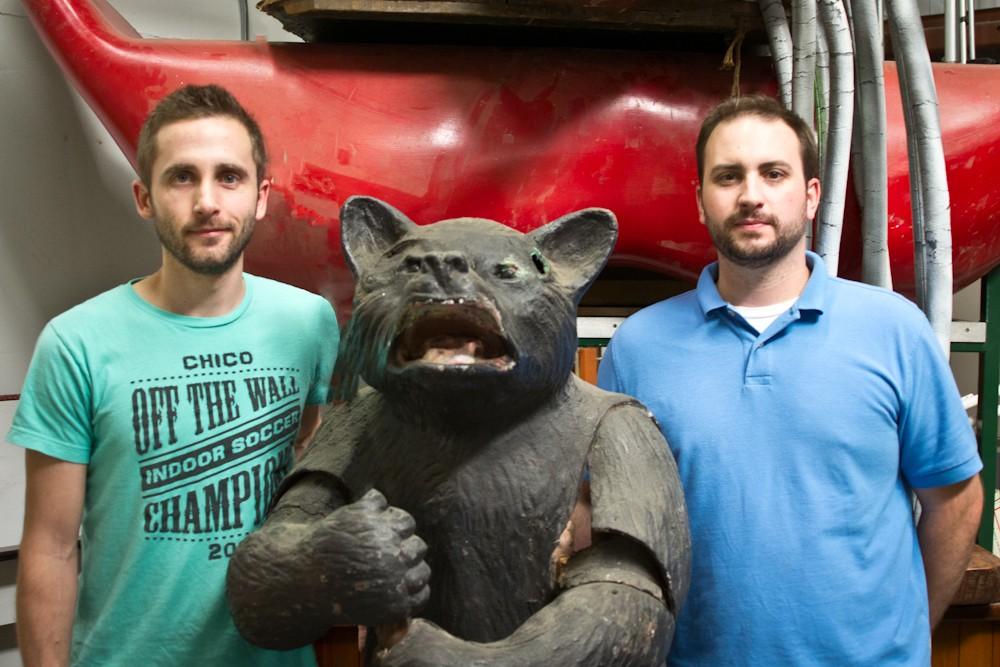 Colorful posters and flyers hang on the walls, lay on the tables and are spread on the counters of a small office far down Cohasset Road.

When the two aren’t catching up with friends, scarfing down their favorite Bravo Avocado Vegetarian Burger or the Jiffy Burger, they can be found working on multiple graphic designs per day.

The two men started working for the Bear in January and March of 2008.

While attending Butte College in 2005, Massari started his own screen printing business. While he ran his business, he also started to create some shirts for a friend from his accounting class who was building The Bear’s website. Although a web guy, his friend lost interest in working on websites and asked Massari if he’d be interested in working for The Bear.

“The Bear was looking for someone to do graphics along with the website and I was phasing out of running my own business,” Massari said. “I started part-time.”

However, the job would’ve been too much to tackle with only one person.

Massari knew Scholz through a friend, and after two months of working by himself the two became an art team.

The Bear’s signature logo and cartoonish illustrations can be spotted in the restaurant, on its menus and on flyers hung all over Chico.

These designs were not created by Massari and Scholz.

“The logo, since The Bear is so old, was already done,” Massari said. “The old style art and illustrations are really fun and cool and there’s different artists who created that artwork.”

Scholz said their job is to scan, enhance, manipulate and sometimes even blow up the old art depending on what size is needed. They also add the color to the images because originally they’re all black and white. They keep the old artwork tucked away into a binder containing several pages of illustrations.

“Ninety percent of the work we do is done behind the computer on Photoshop and Illustrator but the company is small enough so we help out with other things, for instance, we hook up the high definition TVs at The Bear,” Scholz said.

The two graphic designers work with the store owner and general manager of The Bear. Their creations depend on what the restaurant is in need of whether it be new T-shirts or a flyer for a new food item.

“I’m working on the new Trike Shirt right now,” Massari said “Aside from shirts, flyers and posters we also create designs that are placed on items including promotional products, canopy’s, pens, magnets and even lip gloss. “

A graphic designer’s process is unpredictable.

“The crazy thing about graphic design for me is that I’ll be struggling with something and then I’ll start to work on something, then something else and all of a sudden I’ll be driving one day and I’ll be like ‘oh my gosh, it just clicked’ like what color scheme I’m going to use or what image to add,” Massari said.

Scholz said the reality of the business is that sometimes you get rush jobs and you have to be quick on your feet but the two are lucky because they get a lot of time to work on things and throwing ideas off of each other really helps.

Massari grew up in a family with a graphic design background.

His grandparents had a banner business and his mom started doing the same thing. He said she worked for another place that did a lot of graphic designs and she was in charge of promotional products.

“I had gone to a couple of trade shows where they predominantly did t-shirts and that kind of design,” Massari said. “I really liked the design element to it and then I got this job and I had to learn graphic design just by doing screen-printing so it kind of came hand in hand.”

Scholz, on the other hand, didn’t always want to be a graphic designer.

“I was a history major and then I switched my major to computer graphics and wanted to do video game design but then I realized how much work was really involved with that, so I decided that I’d pursue more graphic design,” Scholz said.

These men feel fortunate to work in the field of graphic design.

“We listen to a lot of podcasts of the people that do good on their own and the people that work for a place where all they do is coporate-y stuff that they hate and I feel like we kind of get the best of both worlds,” Massari said. “We get like this middle ground being able to be creative but also following guidelines.”

Both enjoy the creative aspect of their jobs as well as not having eyes over what they do.

“Being able to have a say in things and have our opinion valued, it’s pretty unique,” Scholz said. “I feel like that’s something that’s like a small business in Chico type of thing.”

Nicole Santos can be reached at [email protected]