Chancellor focuses on tuition in speech 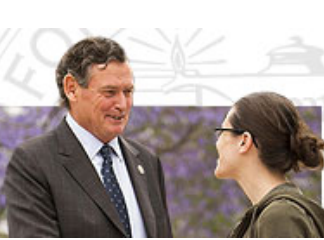 While tuition costs are not expected to increase next year, the California State University system is still struggling with funding and graduation rates.

“$100 million is short to take care of current students, not to mention qualified students for next year who won’t have room in classrooms,” White said.

After his opening speech, phone lines were opened to the public for questions.

White said that while tuition rates are holding steady, but the system is lacking funds for students.

The rate is currently being held flat, which is less than the rate of inflation.

Transfer students were another concern that was addressed during the speech. They now make up about half of the university population. The new associate of arts for transfer program is now being implemented into community colleges to create a clearer pathway for students when transferring to universities.

Challenges that students face post-graduation were discussed, with the concern surrounding post-college employment. White heavily stressed the importance of students engaging in internships to prepare them for the professional world.

He also noted that there is a one million student graduation drought where students are enrolled in schools but never graduate.

“If California is unable to beat the degree drought, then high paying jobs will leave California,” White said.

Although students not graduating has created a statewide problem, new education plans will not compromise the quality of the courses.

“It takes a village, a community, to be successful in today’s world,” White said.

Elaine Knudsen can be reached at [email protected] or @theorion_news on Twitter.