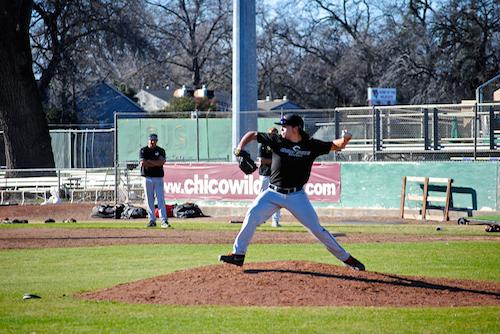 Pitcher A.J. Epstein throws a player out attempting to steal a base during practice. Photo credit: Zach Aucella

The Chico State baseball team entered in their first game of the season playing against Fresno Pacific in their home territory with the ‘Cats losing 1-2.

The game consisted of many no hits no runs from both teams with little action. In the bottom of the ninth inning, the Sunbirds finally made a comeback with first year infielder Nate Case scoring to tie up the game.

The tie resulted in the game going into an extra inning. The Cats’ had no luck, striking out in the top of the tenth.

The Sunbirds stepped up to bat with senior outfielder Nico Payan breaking the tie to hand the Cats’ a lost to start off the season.