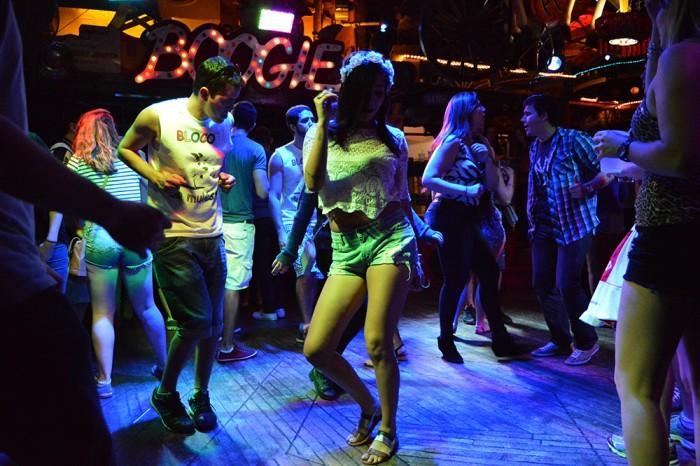 Students from across the globe came together to celebrate Brazilian heritage carnival-style at Madison Bear Garden.

On Sunday, students gathered at the establishment to celebrate “Carnival,” an event put together by international students from Brazil to bring a little slice of the culture to Chico.

Carnival is an event that happens around the world but is usually heavily celebrated in Brazil. The festivities often happen before the Catholic holiday of Ash Wednesday, which precedes the forty days of Lent. Although Lent has already started, the organizers wanted to hold it to celebrate something that is so special to them.

Gabriela Monteiro, an international student from Brazil, described the event as a way to bring together Brazilian culture and the many other cultures found at Chico State.

“We put this on so that we can feel close to home,” Monteiro said. “We came here [Chico] to learn about your culture, but this way we can teach you a little something about our culture.”

Attendees of “Carnabear,” a name that the creators have also used to refer to the event, met on the second floor of Madison Bear Garden for the event. The music was pumped through the speakers as students from all over celebrated by dancing and laughing with one another.

Vinicius Santos, an international Butte College student from Rio de Janeiro, talked of the music that filled the room with a strong drum beat. The music playing was called marchinha, a famous type of music usually played at big street parties that occur during Carnival, he said.

While living in Rio de Janeiro, Santos was apart of a Samba school, where he played percussion. These schools there prepare for the whole year to compete for a spot to play in the grand parades that occur during Carnival, he said.

“We work the whole year to play in just a eighty-two minute performance,” Santos said.

The chance to play in a Carnival parade is a great honor and the school that is chosen to play is awarded a large sum of money, which they use to prepare for the next year, he said.

Rafaela Vieira, senior at Chico State from Brazil, worked with others to put on Carnabear. She explained a different type of music that originates from Rio de Janeiro as well.

Funk carioca, as it is called, comes from the poorer areas of Rio, known as the Favelas. The beat and rhythm of funk songs are very contagious and no matter where you are from, you can dance to a funk song, she said.

“The music (funk) makes people come together, no matter how much money you have,” Vieira said.

Sophie McCartney, a junior at Chico State from South London, England, was at Carnabear with her friends to celebrate. McCartney has three Brazilian roommates who introduced her to their culture, she said.

McCartney likes how they are not afraid to be loud and unreserved when celebrating their culture. There is a stark contrast between the culture she grew up with and the American culture she has experienced while studying abroad in Chico, she said.

“Life (in Brazil) seems very colorful and everything is a celebration,” McCartney said.

The event aimed to show that everyone can have a great time listening to music and conversing with others regardless of cultural background. Getting out there and experiencing it can be the first step in learning about new cultures.

Madeline Merlic can be reached at [email protected] or @theorion_news on Twitter.