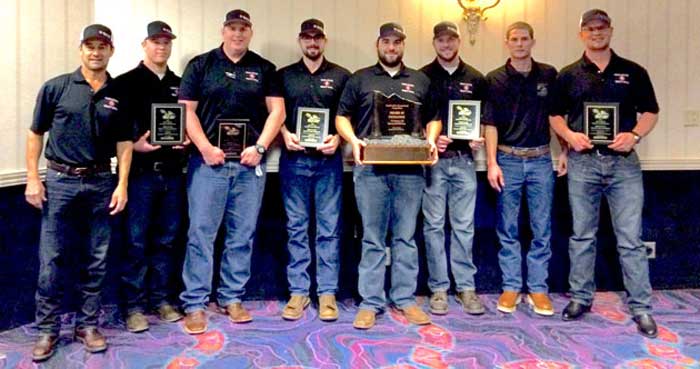 Chico State students on the heavy civil team competed at the Associated Schools of Construction Student Competition in Sparks, Nevada, and won first place in their category. Photo courtesy of Chris Souder.

Chico State students on the heavy civil team competed at the Associated Schools of Construction Student Competition in Sparks, Nevada, and won first place in their category. Photo courtesy of Chris Souder.

Chico State construction management students had a chance to show off their skills in a regional competition held Feb. 5-7 in Sparks, Nevada, and brought home a trifecta of top-tier awards.

The Associated Students of Construction Student Competition is a three-day event that challenges students to find solutions for tough problems in only 18 hours. The team’s ideas are then presented to a panel of industry judges for scoring.

The teams consist of six members each with two substitutes, who compete in other categories so they are still able to participate in the competition if they’re not needed to replace a starting team member.

The heavy civil team, coached by professor Chris Souder, placed first, outperforming 16 other schools in the category. Souder also coached the marine team which placed third in its category

“I’ve coached two teams for 10 years, and this is the first time that I’ve had both teams place (in the same competition),” Souder said.

“A practice problem is when we have a company send a couple of their full time employees to Chico to put on a mock problem like what we would get at the competition,” Rivas said.

His team worked three of these problems, which usually take 10 to 12 hours to complete.

The commercial team, coached by professor Alan Bond, placed second in its category and missed out on first place by one point out of 200.

Following the contest, each team attended a job fair where there were more than 110 companies in attendance.

“Representatives from the companies will sit through almost 10 hours of presentations, taking notes and deciding which students they think did the best,” Bond said.

“Myself and my teammates did receive interview offers from many companies that were present,” Rivas said.

But the competitors get more than just interviews for competing. Students fight for monetary prizes, trophies and bragging rights.

Getting first place is a substantial achievement and Rivas believes that Chico State’s teams will continue to be just as successful in future competitions, he said.

“I absolutely hope they continue to be successful and have no doubt they will be,” Rivas said. “With the invaluable experience the returning guys received this year, the help from our coach and industry, I believe they will bring Chico the first place trophy again.”