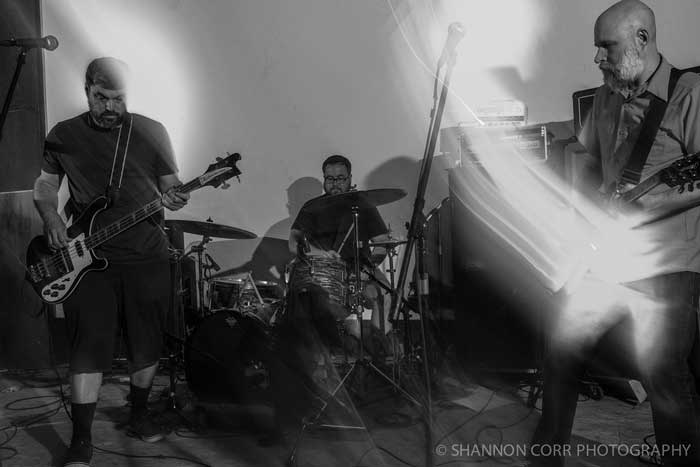 West By Swan will be coming forth with its experimental rock music at Monstros Pizza on March 20. Bassist Greg Hopkins discusses background influences, the dynamic of the band, where they have been and what is in store for them.

What are some of your guys’ artist or band influences?

Greg: Well, we’re older. So you know, a lot of Fugazi. D.C. bands. I was born in D.C. and lived in Maryland and Virginia until I was 22. So a lot of that stuff. Bad Brains for me.

Where did the name West By Swan come from?

Before West By Swan, Dan told me that he and Conrad, who was the first bassist, were in another band together called North Magnetic. They wanted to keep the directional name continued, and the words sounded really good together. Then they found out there was a river called Swan River west of Perth in Australia. It wasn’t really the namesake, but it was funny to figure that out later.

What local venues do you guys usually play at?

Monstros Pizza, The Maltese, 1078 Gallery, Cafe Coda. I don’t think there is a venue we haven’t played here. There is also a smaller spot that has a show once a month on Orange and Sixth. We’ve played there. Really anywhere that will have us. I prefer all-ages shows. For one, there will be more younger people there who are not necessarily there to drink but to actually listen to music. I have a 14-year-old son, and he has been to a couple of our shows, so they come to the all-ages show. It’s cool. Last year when we did our CD release show Dave’s kid’s band opened up for the show.

Yes, we have have one March 20 at Monstros Pizza, and we are playing with a touring band. And then another local band called Shadow Limb. My other band Metronaut just opened up for them last Friday at The Maltese.

What local bands are you guys into?

Are you guys wanting to do a U.S. tour in the near future?

We haven’t toured in a while. Last year we did a small tour from here, Yuba City, Redding, Sacramento and a festival in Oakland. This year has been a little more low-key then normal. But we would like to tour more. Dan has a 4-year-old and an infant. And I’ve got two kids, and Dave has two kids. Daniel has been really busy with his other bands as well. So we do what we can. But you know, that is not holding us back.

Any last words for the fans and readers out there?

Enjoy live music as much as you can. There are not a lot of venues left that have original rock. Or just loud rock in general. Support local music as much as possible. Support venues like 1078 Gallery and Monstros Pizza.