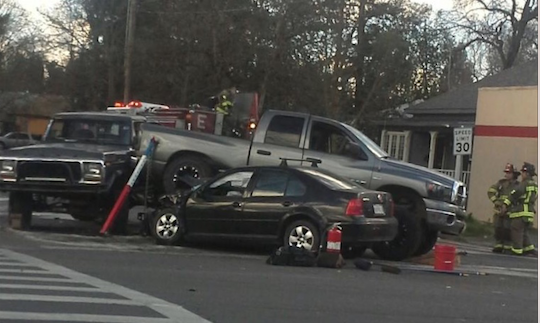 A three-car collision occurred in front of ABC Market on Ninth and Ivy streets at about 2:30 p.m. on Friday.

According to a Chico police officer, the driver of a Dodge pickup truck stopped on Ivy Street at the stop sign facing Ninth Street and then proceeded to drive onto the one-way street.

The Dodge pulled directly out in front of a woman driving a Volkswagen.

The woman was driving down the one-way street on the left side of the lane going the speed limit of 30 mph.

The Volkswagen smacked the backside of the Dodge and both spun clockwise.

The driver of the Volkswagen said she did not see the Dodge turn in front of her until it had been too late.

The sun is a possible factor in the accident and could have prompted vision glare, the officer said.

The driver of the parked Ford said that his car was in fine condition.

Brianne McEvoy can be reached at [email protected] or @theorion_news.