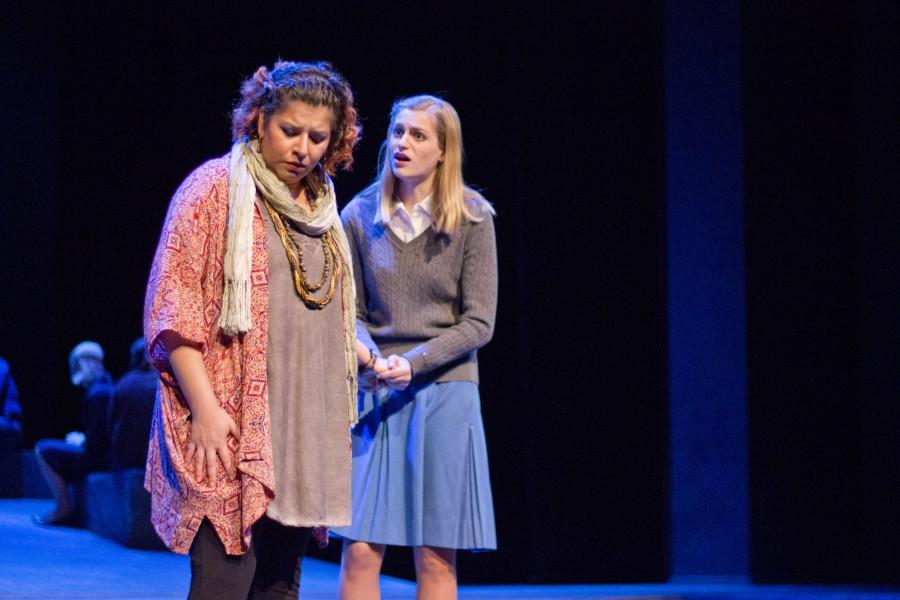 The action and drama of the Greek tragedy, “Antigone,” plays with complex ideas of morality.

When Chico State’s Department of Music and Theatre chose to stage a Greek tragedy they knew it would be unlike other shows they have done in the past.

“Because we’re working in an education department, we are obligated to do a variety of styles, genres,” said William Johnson, faculty member and director of Antigone. “We haven’t done a Greek tragedy in forever. It was just time we did one.”

The play follows the story of a young girl named Antigone (Krasel Morales) who dares disobey the king of Thebes, Creon (Tony Varicelli). Antigone buries her brother’s body after the king ruled that it should not be given a proper burial. Chaos ensues, and like most Greek tragedies, most of the cast ends up dead.

The play, though written around 441 B.C., has been updated for the Harlen Adams Theatre stage. A city skyline sets the scene, with ominous and dark skyscrapers painted on the backdrop to bring ancient Thebes into the modern era. The set, though simple, provided ample space for the large cast to move around, and was designed and executed by Chico State students.

Despite the story and words being old, the cast does a good job making their lines seem natural. Particularly Varicelli, an outstanding actor. His character, Creon, starts off as a pompous politician and ends up a man crippled with grief. He has many long monologues that are spoken with thoughtfulness and seemingly genuine emotion.

The idea of a Greek chorus makes the narration of the story (lead by the strong choragus, Lara Tenckhoff) bounce from actor to actor. The cast wears gray masks to hide their faces as they almost chant the occurring events.

The masks are a brilliant part of the costume, keeping the background characters from distracting from the action. They are also a symbol of the townspeople’s meekness and their fear of speaking out.

The sound and lighting were kept relatively simple, just adding to the ominous mood of the play. The lighting in the last scene is particularly compelling, spotlighting Creon at his lowest and the leader of the choir as she reveals his fate, then fading to black.

Though the show is certainly not action-packed, and may feel slow at some points, the real power lies in the powerful and thought-provoking dialogue. The struggle of morality and following one’s conviction is a timeless theme that makes “Antigone” relevant and interesting even 2,500 years later.

Greta Gordon can be reached at [email protected] or @hakunagretata on Twitter.