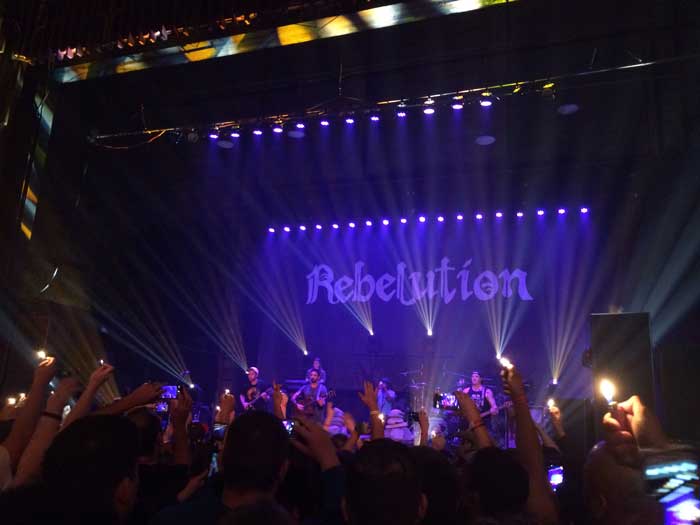 Smoke filled the room and red, green, and yellow spotlights danced around the ceiling at the Senator Sunday night as Rebelution took the stage. The crowd went wild cheering.

“Tonight we’re going to play a little of old stuff and a little new stuff,” announced the lead singer Eric Rachmany to a cheering audience, “hope you enjoy.”

The band Rebelution is a California Reggae band started in 2004 in Santa Barbara. Last year their album Count Me In was named best selling reggae album of the year. Last night they made a stop in Chico for their Winter Greens 2015 tour. The show was sold out.

True to their word, during the show Rebelution played songs from all four of their studio album. Almost all their songs have encouraging messages about spreading love, promoting peace, and their signature, “bringing only good vibes.” At one point in the middle of the show Rachmany asked the members of the crowd to put up a peace sign for the next song.

Their music is unique in comparison to other reggae groups. It is more California than Jamaica, and the distinct voice of the lead singer makes the their sound distinguishable. They label themselves as a combination of rock, reggae, and world music.

On stage, the four band members and two touring members looked like they were having just as much fun as the audience, smiling and bobbing, clapping and waving their hands.

What made the show great was the two touring band members, Khris Royal on saxophone and clarinet and Zach Meyerowitz on the trumpet and guitar. Their brass instrument solos were spectacular and they played off of each other, building up the song more and more until its triumphant climax.

The band played two encore songs, “Meant To Be” and “Sky is the Limit.”

“The show had such good vibes,” said Chico State sophomore Sydney Gehlan after the show, “their message was so positive.”

Greta Gordon can be reached at [email protected] or @hakunagretata on Twitter.