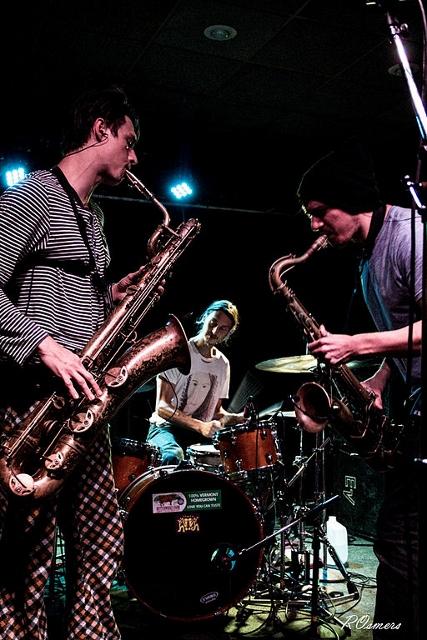 Photo by Roberta via Wikimedia Commons.

Dance music is often identified as lacking musical integrity. But Brooklyn-based house group Moon Hooch simultaneously impressed the audience and got its feet moving at Lost on Main on Sunday.

The energetic and enthralling trio has garnered much success over the years because of its unique contribution to the world of music. The band has gone from starting dance parties in the New York City subway system to selling out venues across the country, each time putting on a show that makes audience members want to spread the word.

What pulls together audiences for this group is its ability not only to get people on their feet and jiving, but to also put on a skillful, fantastic show.

The trio met at The New School for Jazz and Contemporary Music (in the Greenwich Village neighborhood of New York City) and have the fine-tuned abilities to prove it. Their impeccable tone and musicianship make them all the more enjoyable to dance to.

While many amateur bands use a saxophone player in an attempt to be edgy or unique, many are self-taught and, as a result, play out-of-tune and put a damper on an otherwise good band. Moon Hooch, on the other hand, has impeccable musicians who show that an odd composition of instruments can help and not be a hindrance.

The trio is made up of two saxophones and a drum set, and sometimes switches out a saxophone for a contrabass clarinet or for a saxophone with an oversized traffic cone taped to it.

Any and all woodwind players will not only be impressed by the musicians’ ability to make this work, but also by their alternating time signatures and circular breathing skills. The amount of stamina required for putting on a show like this — an hour or so with no breaks in the set for talking or applause — is remarkable.

Listeners who don’t know anything about musical composition shouldn’t be perturbed; the band’s set is no classical concert, and will certainly not put audiences to sleep.

Photo by Roberta via Wikimedia Commons.

Lauren Smith can be reached at [email protected] or @reginechassagne on Twitter.