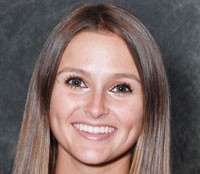 O’Keefe posted a round one score of 77, which put her tied for eleventh after the first round. The next day, she dropped her score three strokes and posted a 74 for round two. She ended the tournament tied for fourth place with an overall score of 151.

Armanini also finished in the top 20. She posted a round one score of 81 and a second round score of 76, which gave her an overall score of 157, good for a share of sixteenth place.

McGrew finished tied for 44th, with an overall score of 169. In round one she carded an 83 and an 86 in the second round.

The Wildcats have a nine day break then they are on the road for back to back tournaments in Goodyear, Arizona on April 3-4 and Rohnert Park, California on April 6-7.