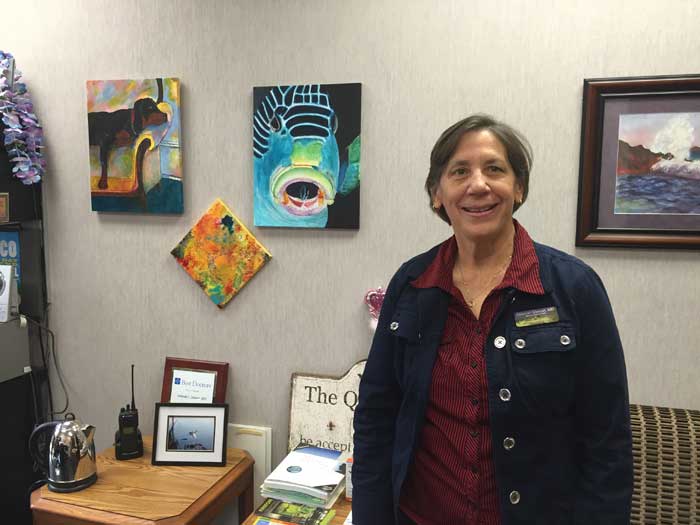 Deborah Stewart, medical chief of staff at the Student Health Center, shares useful information on how to treat and avoid illness this time of year. Photo credit: Nick Bragg

Sniffling, sneezing, coughing — it’s everywhere. Students regularly come down with colds and suffer from allergy symptoms in the spring.

Multiple illnesses can dampen students’ health, but there are simple ways students can avoid becoming sick form the start.

Deborah Stewart, the medical chief of staff for the Student Health Center, warns students of the most common illnesses at this time of year.

The center is always busier around this time if year, so if medical attention is needed students should make an appointment, or come in when it opens at 8 a.m., Stewart said.

Prince Jones, a junior kinesiology major, knows a handful of students who are ill, he said.

“I know a lot of people who are sick,” Jones said. “Mostly all have colds, but a few people have told me they have strep throat.”

There are many precautions students can take such as washing their hands often and sneezing into elbows instead of hands, but is this really enough?

To answer that question, Stewart provided some suggestions on how students can avoid becoming sick.

Get a flu shot at the Student Health Center.Frequently wash hands for 20 seconds or more Avoid touching the eyes, nose and mouthAttempt to avoid people who are sickGet lots of sleepEat lots of fresh fruits and vegetables

If students take these simple precautions, it will greatly reduce the risk of becoming sick, she said.

For the already infected, multiple tricks can be used to kick the sickness more quickly.

Take some time for yourself

“Stay home and take care of yourself if you are ill, especially if you have a fever,” Stewart said. “You are doing no one a favor, including yourself.”

“Researchers from the University of Nebraska Medical Center found that chicken soup prepared with lots of veggies reduces some of the inflammation responsible for cold symptoms, like runny nose and congestion,” Stewart said.

If nasal congestion is an issue, consider using a nasal wash with saline

If students follow these simple guidelines then the spread of illness will reduce, which will lead to more people in class and learning, instead of laying in bed sick, she said.

One of the easiest and most enjoyable ways to stay healthy is to follow Stewart’s last tip.

“Stay happy, smile, have a positive attitude no matter what,” Stewart said. “Positive thinking, playing with a pet and other pleasurable behaviors boost your immune system.”