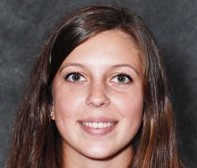 Sophomore Abbey McGrew ended the tournament tied for seventh place with a total score of 150.

She posted a score of 75 on both days. She finished the tournament plus-6.

Junior Dani O’Keefe finished tied for 19th place. She carded a first round score of 80 and in the second round shot six strokes better, which gave her a score of 74.

Junior Bianca Armanini ended tied for 52nd place. She shot an 81 in the first round and an 80 in the second round.

The ‘Cats now travel to Rohnert Park, California for the West Regional Preview on April 6-7.