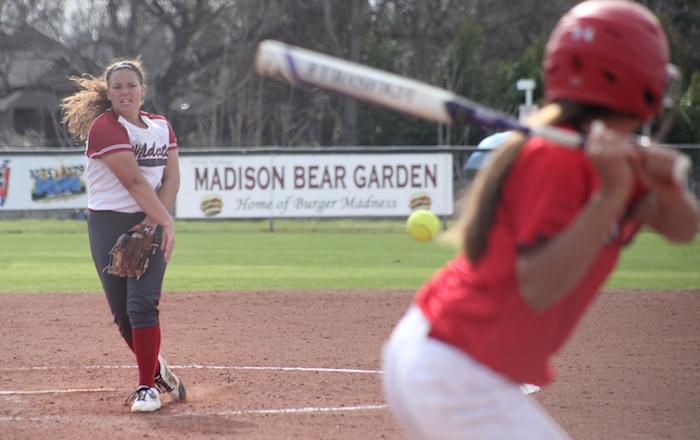 Freshman pitcher Haley Gilham launches the ball at the Chico State softball field in a game against University of Hawaii on Feb 12. Photo Courtesy: John Domogma

The Wildcats and the Tritons dueled the length of seven standard-time innings sharing zero runs in the process.

It wasn’t until the extra inning where UC San Diego snuck away with the win in Friday’s twin bill opener.

With the bases loaded, the Tritons scored the only run of the game, one of four on the day, from a walked batter, forcing the runner at third-base to advance home.

The Tritons won the seven-inning stalemate, 1-0.

The second game of the doubleheader was another head-to-head battle as anticipated.

The first three innings were scoreless for both Chico State and UC San Diego.

The Tritons broke the dry spell with a rally in the fourth inning, scoring three runs to push them into the lead.

The ‘Cats were scoreless in all 15 innings on the day with just six hits and only one multi-base hit. The Tritons were able to squeeze four out of the Wildcats, but proved enough to pick up the wins in a pair of pitching duels at the Wildcats home stadium.

Dylan Wakefield can be reached at [email protected] or @dylan_wakefield on Twitter.