Memorial held for student who died in fatal car accident 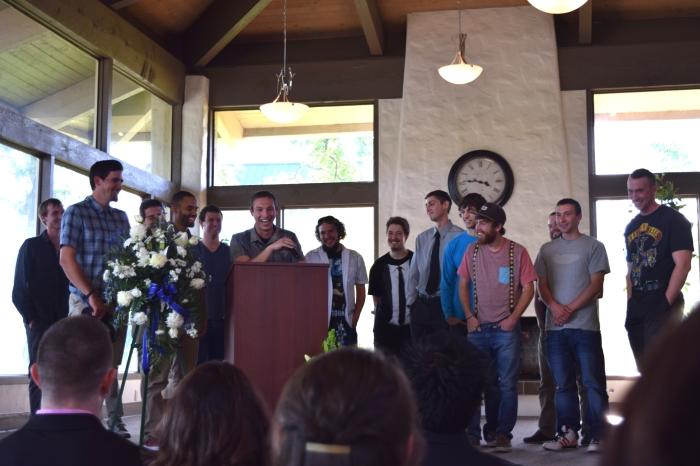 Ned Klein, Nickolas Klein’s twin brother, donned his late brother’s Guns N’ Roses t-shirt as he conducted the commemoration of Nick’s life. He began by sharing his own memories of Nick.

“The only thing that brings the most joy is to talk about him,” he said. “I really can’t stop smiling when I’m thinking about Nick.”

Friends and family of the Nick Klein, a Chico State senior who died on March 30 after being struck by a vehicle in downtown Chico, gathered at Lakeside Pavilion to remember the life of their devoted friend, classmate and brother.

Nick’s love for music, especially classic rock and metal, was the subject of many memories.

Ned told a story of how Nick had taught himself to play the piano just so he could play the theme song to the Mortal Combat video games.

For every person that spoke, Nick’s kindness and positive attitude was what set him apart.

“Nick was by far the most genuine person I’ve ever known,”One of Klein’s former roommates at Chico said. “Always positive, always looking forward, Everything I have ever done with him was a blessing.

Klein’s group of childhood friends, who referred to themselves as “The Brothers,” remembered their friend as endlessly kind, caring, and upbeat.

Benjamin Williams, the youngest of “The Brothers,” gave a bit of succinct advice to everyone. “Be happy,” he said. “Be more like Nick.”

Ned and several others, friends and classmates alike, described Nick as impressively intelligent.

Klein was a member of the Engineering Honors Society, in the midst of completing his senior project and was on his way to graduate with a degree in mechanical engineering on time.

As a way of honoring Klein for his talent and dedication, Chico State administration announced that they will award him a bachelor’s degree in mechanical engineering according to a press release.

Members of the audience took turns sharing, and every person was sent off with a hug from Ned Klein.

Ned said the memory of his brother alone brings him tremendous joy. “Thanks to my brother,” Klein said. “I am the most fortunate and blessed person on this earth because I will be able to think about him forever.”

Dylan de Wit can be reached at [email protected] or @DylanTdeWit on Twitter.