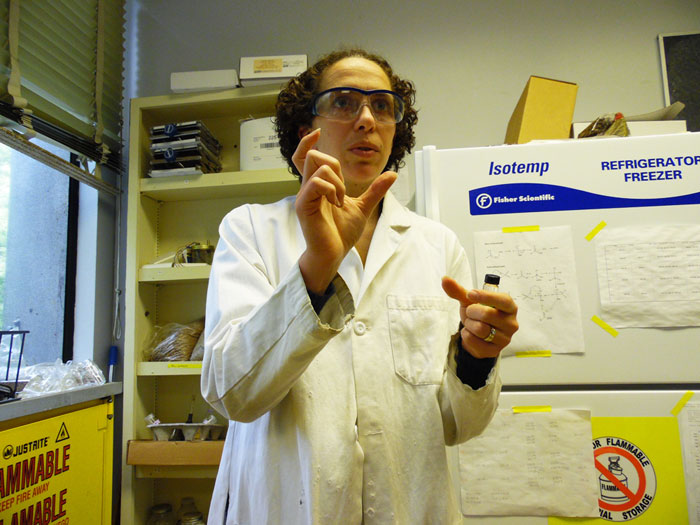 Chemistry professor Lisa Ott has been engaging in innovative research focusing on turning the glycerol waste that results from biodiesel production into a solvent that scientists can use in chemical reactions. Photo credit: George Johnston

With more than 200 million gallons of glycerol waste produced each year from manufacturing biodiesel, the process of disposing of this hazardous byproduct can be a sticky business.

Lisa Ott, a Chico State chemistry professor, has been engaging in innovative research to turn the glycerol waste into a substance that can in turn be sold for profits.

With her method, Ott is going to be taking hazardous material out of the the waste system and making the glycerol into a useful tool for the chemistry department as well as a profitable substance for biodiesel manufacturers, she said.

Ott has been studying biodiesel since her postdoctoral education.

“We were doing a lot of fuel chemistry work and working with rocket fuels and jet fuels and things like that,” Ott said. “And so that’s where I sort of started thinking about fuel chemistry and got into biodiesel. Since I’ve come here, we have always done some sort of biofuels type (of) research.”

Biodiesel is a clean-burning, renewable alternative to traditional diesel, which is minimizing the United States’ dependence on foreign oil. Recycled cooking oil, soybean oil and animal fats just barely scratch the surface of what biodiesel can be made from.

Ott’s research is focusing mainly on what to do with the glycerin waste produced from manufacturing biodiesel. For every 10 gallons of biodiesel produced there is one gallon of glycerol byproduct, she said.

To put things into perspective, Ott spoke about the waste on a larger scale.

“There’s a local biodiesel company called Springboard Biodiesel,” Ott said, “and if they have to get rid of a barrel of it, it’s like $400 a barrel because it’s hazardous waste.”

To fix this problem, Ott involved her chemistry students in doing research on turning the glycerol into another substance that could be sold for profits. Through her research, she found that glycerol waste can be transformed into a deep eutectic solvent.

A deep eutectic solvent is an ionic liquid with a very low boiling point that can be used in chemical reactions for scientific research.

“If you’re tying to make a new molecule, you have to dissolve your reactants in a solvent,” Ott said, “and we are proposing this as a reaction solvent.”

A reaction solvent serves as a medium for chemical reactions, the main purpose of which is to dissolve the reactants in the liquid.

Ott, along with other faculty members, Chico State students and two high school students submitted a paper about their research to the journal Fuel Processing Technology. Chico State is the first university to submit a scholarly paper about this subject, she said.

“I’ve been looking at the literature, and I haven’t seen anything else,” Ott said. “That doesn’t mean someone else isn’t working on it, but we submitted our paper so hopefully it will come out first.”

When the paper is approved and published, Chico State will be the first university to create a way to turn biodiesel waste into a profitable deep eutectic solvent. Curiosity surrounds every problem we have, Ott said, and this is what drove her to create a clean way of reusing hazardous waste.

“I think that’s the best kind of chemistry,” Ott said. “(The kind) that comes about from natural curiosity or wanting to solve a problem you have.”