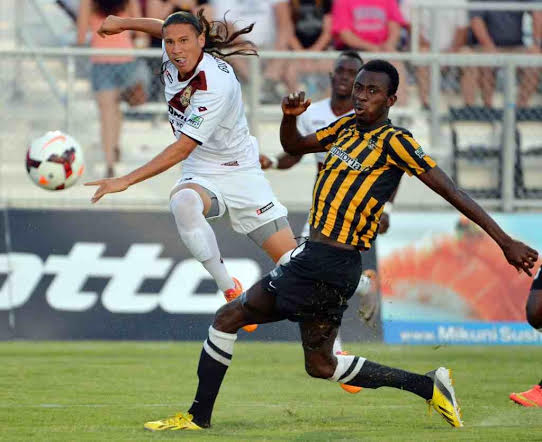 Octavio Guzman, left, battles for the ball against a player from the Charleston Battery team last year. Photo courtesy of Octavio Guzman

From the pitch in the University Soccer Stadium at Chico State to Bonney Field in Sacramento, former midfielder Octavio Guzman has worked his way into the United Soccer League playing for the Sacramento Republic.

Guzman played forward for the Wildcats and was part of a squad that reached the NCAA Tournament in 2013 during his senior year. The team fell in that match against UC San Diego in a shootout.

Guzman was one of the cogs on a Chico State team that made history and helped transform men’s soccer into a California Collegiate Athletic Association powerhouse.

As a Wildcat, Guzman accumulated 36 victories and was one of the hardest workers on the team during the 2013 season, said Felipe Restrepo, the soccer team’s head coach.

“Octavio was one of the nicest guys I have ever coached,” Restrepo said. “A great teammate (and) hard-working player who was one of the guys who would put the team first.”

Guzman was recently named the penalty kicker for the Sacramento Republic of the United Soccer League.

In only his second year as a professional soccer midfielder, Guzman has become the go-to player for penalty kicks on the team.

So far in the 2015 season, Guzman leads the team with three goals and has started every single game for the Sacramento Republic.

During his soccer career at Chico State, Guzman played a variety of positions after transferring from Los Medanos College in Pittsburg. He started his Wildcat career playing forward but finished as a midfielder.

In regard to being a professional penalty kicker for the Sacramento Republic, Guzman said that anybody on the team can step up and take advantage of opportunities when they are presented.

The Sacramento Republic hosted an invite-only college combine in 2013 and Guzman was offered a contract after performing, he said.

In his second year in the pros, Guzman has already made a name for himself on the Sacramento Republic and is hoping to make a Major League Soccer team eventually, he said.

Guzman’s time in Chico was something that he benefits from because he learned a lot about becoming a blue-collar player and having a good work ethic, Restrepo said.

“The philosophy we have here at Chico and how we want to be as a program,” Restrepo said, “some of that rubbed off on him, which has allowed him to look at becoming a pro a little different.”

Lars Gustafson can be reached at [email protected] or @larsonsports on Twitter.