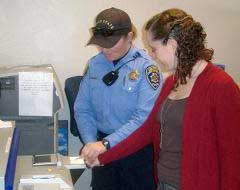 When it comes time to hire new faculty members, departments do their best at showing off Chico State as the best place to teach on the candidates’ recruiting visits.

But with a recent change in the background check policy, potential faculty members may be put off by having to take a trip to the Police Department.

According to the Chico State Faculty Recruitment Manual, all new employees offered permanent or temporary positions have to undergo a criminal background check through Live Scan technology. It is up to each department to decide if it wants to check all candidates or just the finalists.

With Live Scan, the University Police can scan someone’s fingerprints and send them directly to the Department of Justice in minutes at a cost of $75, said Sharyn Abernatha, assistant vice president for staff human resources.

Fingerprinting at Chico State has not always been the policy. Live Scan started in 2013 with only staff and management, Abernatha said.

Since then, it has expanded to include new faculty starting last school year, and the hiring department is responsible for paying the Live Scan fees.

Kathryn Silliman, department chair for nutrition food and science, had five potential faculty members scanned this year,at a cost of $375.

Silliman understands the reasons for having criminal background checks, she said, especially for campus positions that include dealing with money or children.

Having just paid for five background checks, Silliman said that even though her department is smaller than others, the fingerprint scan costs still have an impact on her department’s operating expenses.

“We have to abide by it whether we like it or not,” Silliman said.

The purpose of the scans is to to ensure protection for the people and important records, Abernatha said.

“It is preventive,” Abernatha said. “We want to make sure that we don’t hire the wrong people.”

In cases where red flags pop up during the Live Scan process, University Police contacts human resources, and the background verification committee comes together to decide whether or not to hire the candidate.

The committee’s evaluation focuses on: the seriousness of the crime, the type of crime, the age of when the candidate at the time of the violation and the relationship between the job position and the crime that was committed.

It is unlikely that the candidate will be considered if their convictions include violence or sexual assault, Abernatha said.

However, people that have had DUIs may get accepted as long as their position does not including driving, she said.

Most accept the fact that having background checks done on prospective faculty is important. However, it does impose an issue for presentation, said Robert Tinkler, a Chico State history professor.

“My concern was that we have candidates for faculty positions who are coming all the way to Chico,” Tinkler said, “and we like to have a nice appearance.”

Having to take the candidates to the the Police Department to get fingerprinted on the same visit makes their time at Chico State not as appealing, Tinkler said.

“I understand why it is important,” he said. “But the chances of a person applying to be a faculty member with a criminal background is not likely.”