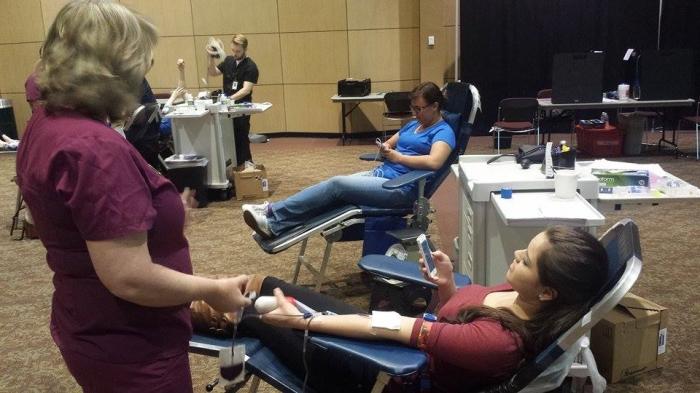 The last blood drive of the school year will be held Wednesday May 6 from 10 a.m. to 6 p.m in the BMU Auditorium.

Robin Carter, an account manager for Blood Source, said the organization set a goal for how much blood they wanted to collect Monday.

“Our goal was to get 117 pints, but it’s a little slower in April and we’re doing it on a Monday where we typically do it on a Wednesday,” Carter said. “I don’t know how much we’ve collected (today) but I think we had almost 160 people sign in, so we’re probably on target for that collection goal.”

To make sure that prospective donors are able to donate and that the donation goes smoothly, Carter recommends interested students drink lots of fluids and eat before donating.

Blood Source is also looking for people interested in donating bone marrow, as it is getting increasingly harder to find suitable donors for those who need it.

The requirements for becoming a bone marrow donor are relatively simple, according to Carter.

“You need to be between the ages of 18 and 44 and generally healthy,” Carter said. “So something that may prevent someone from donating blood, like a new tattoo, wouldn’t prevent them from getting on the marrow registry because it’s considered a temporary condition.”