Officers should work their beats on their feet 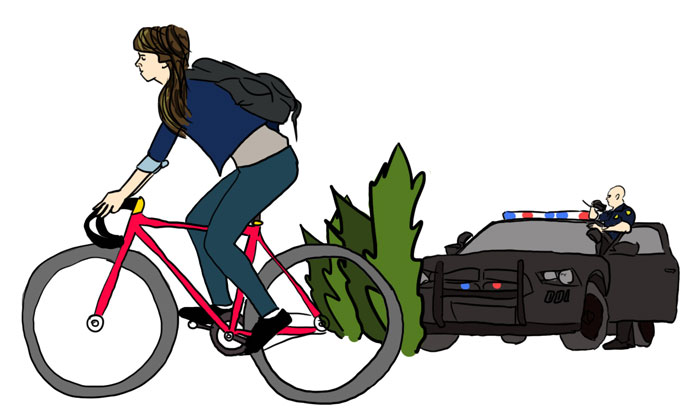 Is it not counterproductive for cops to be in cars on campus in the middle of the day? School grounds get so populated during passing periods that a car actually seems inefficient.

While skateboarders, bikers and the occasional students on scooters weave in and out of walkers, cop cars crawl behind the herd, unlikely to catch any student breaking school rules.

Campus police are better off on their feet like the rest of the student body.

Instead, at the top of any hour as class returns to session and Chico State quiets to a whisper the police hide behind corners in vehicles with silent engines. There they wait to fine wrongfully deemed lawless students who zip by on rubber bike tires and polyurethane skate wheels.

As if students are going to crash into one another at 1:13 p.m. on the desolate, lifeless school grounds . These are adults on big boy bikes, not tykes who need training wheels.

In my three years at Chico State, I have only seen one such accident, and it was not on campus.

A skateboarder on Warner Street with the right of way t-boned a girl biking on Legion Street who ignored her traffic signal. I could hear the impact as I watched the girl fly from her Fixie bike to the curb where her backpack braced her fall.

Where were the cops to regulate the calamity?

Nowhere nearby as they never arrived.

Campus police are either glued to their car seats while stuck in the foot traffic of Chico State or ticketing scholars, preventing them from getting to class on time for knowing how to maneuver a skateboard.

If police want to post up in their cars, they should patrol the streets. Poorly paved roads laced with potholes and trenches from trees uprooting the ground invite riders in the bike lane and roads to trip. Young lives are struck by cars too often in this town.

I do not oppose law enforcement for the sake of being a rebel. I simply believe campus police could enforce the law more effectively.

When campus is hushed, rolling over the smooth concrete surface is not dangerous. A ticket at this hour seems more like an excuse to rob students of what little money they have. By the end of the semester, students will be paying fines with flex cash.

If a student gets a ticket for riding on campus at rush hour so be it.

Police will make campus a safer place by enforcing the law when breaking it compromises health or safety. But unnecessarily fining broke college students for transporting to class only builds resentment for the fuzz.

Miles Inserra can be reached at [email protected] or @m_inserra on Twitter.