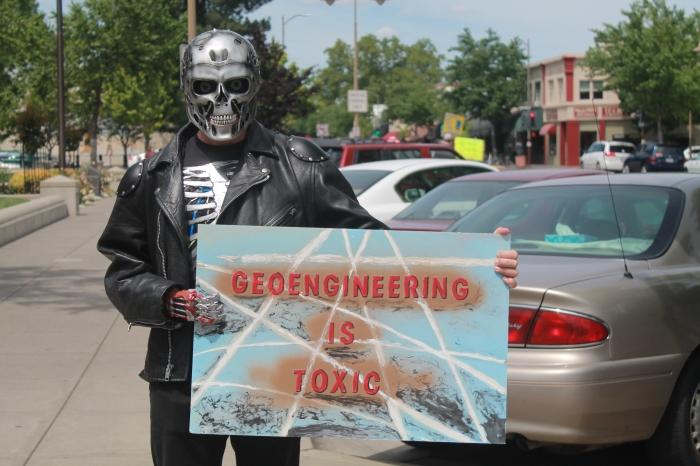 Community members protested in downtown Chico today in efforts to raise awareness to chemtrails left behind by geo-engineering aircrafts.

According to a pamphlet handed out at the protest, chemtrails are “low-altitude, sub-stratospheric aerosol geo-engineering spray trails sprayed from unmarked aircrafts.”

Brian Samson, a Chico native, is concerned by what he has seen in the skies in the last three years.

“They are unmarked, white planes and they leave the sky silver and hazy,” Samson said. “These (trails) manipulate the weather.”

These theories can be tested by measuring levels of chemicals present in aerosol.

“Water sources in Chico have shown to have extremely high levels of aluminum, strontium, and barium which are all agents in aerosol spray trails,” said the informational brochure.

Reasons why these planes are spraying aerosol have several theories, the most popular being climate control.

These spraying projects could actually be more harmful than good. For example, with 20 percent less sunlight which is was was reported after these trails started emerging, trees and more importantly, crops suffer. Less sunlight also means that diseases are easier to obtain because they are less able to resist.

The spraying is not central to California or even the United States. The protestors stress that this is happening all over the world.

Marcia Ecsmen, a Chico community member, encourages citizens to “go online and look up your favorite countries and chemtrails and it’s crazy what you’ll see.”

The protest was put on by a group called Chico Sky Watch which identify themselves as a “GeoEngineering and aerosol spraying awareness and action group.”

People can get involved, donate to research and learn more through the website.

Whitney Urmann can be reached at [email protected] or @WUrmann on Twitter.