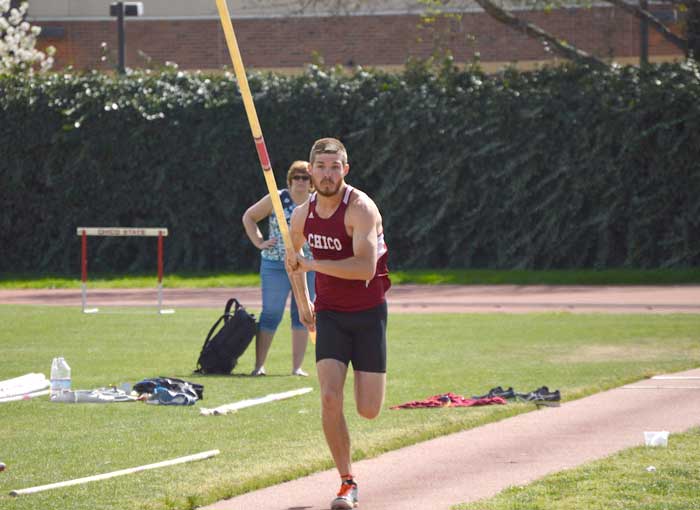 No, this is not a two-day track meet with different people running at different times. These are 10 events all competed by one person in a matter of two days.

It is called a decathlon, and the Chico State men’s track and field decathletes have gone above and beyond this season with all their hard work, culminating in the team being awarded the Webb Cup on April 12.

The Webb Cup given to the school that leads the nation in decathlon success. Division does not matter when it comes to winning the award, which means that Chico State, a Division II school, beat out some of the biggest programs in the nation.

The team members did not even know what a Webb Cup was until they won it, said Scott Pater, a sophomore decathlete. But despite not knowing what the award meant, Pater believes that his team earned it because the men worked together day in and day out, he said.

“It was a huge accomplishment for our program, and something we all take a lot of pride in,” Pater said. “But to me, it’s more than that. I am loving every moment and am so grateful for this opportunity.”

It is not easy to be the best school in the nation for a multievent like the decathlon. The hardest part about being a decathlete is mastering 10 different events, said Lane Andrews, a sophomore team member.

“We are very limited in practice times with each event,” Andrews said. “It takes a lot of time to become well-rounded.”

Decathlon is not done at the high school level. Decathletes have to learn every event when they get to college, making practice times key to their training.

Chico State has a long history of having very good decathletes go through its program, and they have built up a legacy, Andrews said.

The Wildcats have put in the work at practice to deserve being named as the top-ranked decathlon team in the nation. Pater said that he and his teammates are the first ones on the track for practice and the last ones to leave.

“We live, eat, sleep and breathe track,” he said. “We love the sport and the brotherhood that comes with being a decathlete.”

The Webb Cup was established in 2013. It was first awarded to University of Texas. Chico State is the second team to accept it and the first from the Division II ranks.

Junior and transfer student Phil Bailey said he is honored to be a part of the team winning the award in his first year as a Wildcat.

Bailey said that Andrews, Pater and sophomore Jake Mitchell all have big goals for the next few years to carry on the legacy of the program.

Pater said he hopes to contribute another California Collegiate Athletic Association championship and become all conference in the decathlon. He wants to hit his mark in the decathlon to get him to nationals to support teammate Bailey, who already qualified.

All four men have a couple more years under their belt to build together as a team. For now, they are known for being the best decathletes in the nation — and the season is not even over.

“It feels great knowing that I go to the best decathlon school in the country,” Andrews said.