The Upstairs Neighbours return after hiatus with new lineup 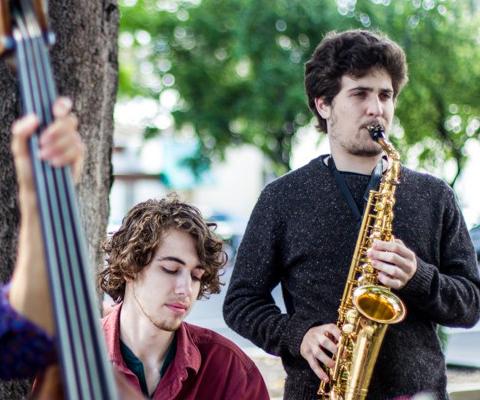 After the death of band member and principal songwriter Aaron Drange, local Chico band The Upstairs Neighbours have returned from hiatus with a new lineup of members and a determination to keep the band going.

The group began with twin brothers Aaron and Phillip Drange, who started in search of a guitarist and bass player. They found what they were looking for in Polo — now a pivotal member of the current lineup — and formed a short-lived band called Five of Five.

It wasn’t until bassist Alex Montes de Oca joined the group that they became The Upstairs Neighbours. In spring 2013, the band started performing regularly at the Saturday farmers market and played relatively consistent shows until Aaron’s death in July. The band then went on an indefinite hiatus.

“Everything kind of fell apart from there because a lot of the music we played was Aaron’s original music,” Montes de Oca said. “He was also a big part of leading the band … even though he was very adamant about us being equal parts of the band.”

Its clear that Aaron’s wishes played an integral part in the decision to reconstitute the group.

“We decided to keep the name and keep the band going because we feel like that’s what he was always pressing for,” Montes de Oca said.

The Aaron Drange Memorial Concert in October marked the first time the band performed without Aaron, but it wasn’t until the release of a Valentine’s Day cover of Paul Anka’s “Put Your Head On My Shoulder” that they let the world know they were about to re-emerge.

Their official comeback was April 18 at the Saturday farmers market, a gig that they hope to play on a weekly basis. The market has brought a good amount of recognition for the group, and through community interaction they have been frequently offered paid gigs around Chico.

With the band’s re-emergence comes a new lineup, and the members recruited after the hiatus are positively brimming with compliments about their experience thus far.

Borges joined the group after being recruited by Phillip Drange, who heard her sing in Chico State’s choir.

“Everybody is so comfortable with each other,” Borgers said. “We make jokes all the time.”

Lehmann, the current saxophonist of the group and a former Orion staffer, was also recruited by Phillip Drange. Having known Aaron personally through playing with him in Chico State’s Jazz Xpress, Lehmann had only to listen to their music briefly before promptly joining in.

“It was the first small-group band I’ve been a part of,” Lehmann said. “I’ve mostly just played in jazz bands in my high school and here, and we’re all a lot closer than those other groups.”

Pianist Michelson took his invitation to the group very seriously, and views The Upstairs Neighbours as a great learning opportunity.

“When I first was invited to play, I tried to talk to everybody individually about what it meant to be a Neighbour,” Michelson said. “I tried to get the vibe of what was going on. I talked to Roxanne especially, who’s over in Japan, because she was isolated from everybody else. I tried to understand what this group was. There are a lot of little pieces of knowledge that are interesting to know, that make up the whole. It’s really great to learn all the little things that we do in the Neighbours.”

Having so recently come back into the Chico music scene, the group has no definitive plan for their future. Despite consisting primarily of juniors who are expected to graduate in a year and a half, the group is taking things on a day-to-day basis.

“We haven’t really talked about it, the future of the band,” Borges said. “Right now, we’re just living in the moment and enjoying everything how it is.”

You can catch The Upstairs Neighbours live at the Saturday farmers market or watch their comeback video below.

Lauren Smith can be reached at [email protected] or @reginechassagne on Twitter.