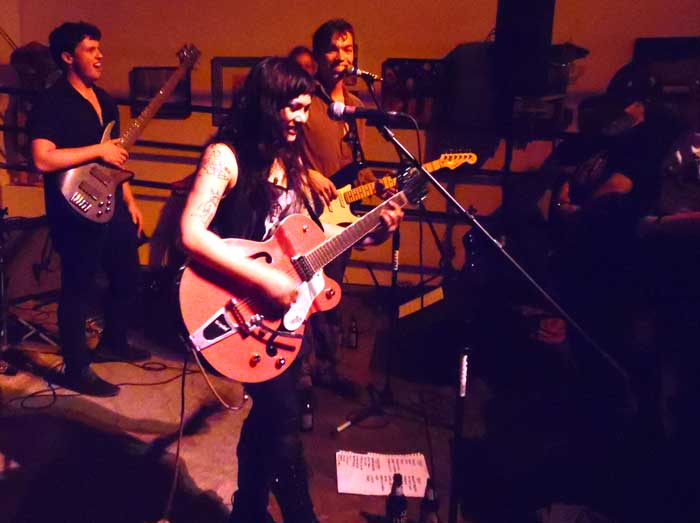 Aubrey Debauchery performs with her band The Broken Bones on Saturday at 1078 Gallery in an emotional set that marks her final show in Chico. Photo credit: George Johnston

The concert, indifferently titled, “See Ya Later, Dudes,” was Debauchery’s farewell to her Chico life as she prepares to take her show on the road and explore what else the big, bad world has to offer.

But the show was certainly anything but indifferent.

The near-sold out jam session was bittersweet for Chico’s beloved indie rocker and the friends and fans who came out to show some love. Still, Debauchery made it memorable and just emotional enough to tug at some heartstrings without bringing the house to tears.

Bass guitar in hand, Debauchery first took the stage with Duffy’s Sirens while the all-ages crowd poured in. Everyone from toddlers to seasoned spectators admired the tunes Debauchery learned how to play just two days prior.

Yet, she came across so natural that it seemed as though she had been playing them her whole life in preparation for that moment.

Between the onstage storytelling and somber song lyrics such as “my time to go” and “the fire went out and now we’re through,” the looks on everyone’s faces made it obvious that it wasn’t an easy set to play for either Debauchery or the band members.

However, in an attempt to lighten the mood, she made a joke that she wasn’t really moving. It was all just a ploy because she wanted to be “continuously complimented.”

Of course, the place laughed, but the subtle shake in Debauchery’s voice spoke volumes about how glum she really felt.

After a killer cover of Smokey Robinson’s “You Really Got a Hold On Me” with the mellow folk band, she took a break (which was probably to grab some much needed tissues and a cigarette) and made way for indie group Candy Apple to come in and pick up the energy.

To be honest, after the slightly depressing show by Duffy’s Sirens (depressing in a good I-love-crying-on-the-inside kind of way), the lively ’60s garage-bandesque sounds were a welcome lift to the spirits of pretty much everyone who was there. Or else the bar would have run out of beer much sooner because the need to drink the blues away was almost palpable by that point.

After Candy Apple’s groovy performance, it was time for Aubrey Debauchery and the Broken Bones to rock hard and have some fun — which they totally did.

After a few wildly keen songs, it became obvious that it was fully dawning on Debauchery that she was truly saying goodbye.

Again, she tried to make light of it by joking that “It hurts so good,” but hearing her choke up and seeing her wipe tears from her eyes when thanking the crowd was no laughing matter.

Like a pro, she pulled herself together and let her soulful voice radiate her appreciation for the rest of the night. It looked like she had the time of her life on that stage, and hopefully it will be remembered as a proper sendoff.

Performing in Chico for the last time must not have been easy for Debauchery, but she gave it all she had until the very end. Just like all the years she gave to Chico leading up to that moment, it is sure to leave a long-lasting impression on a town that grew to adore her.

And no one believed that you just had something in your eye.