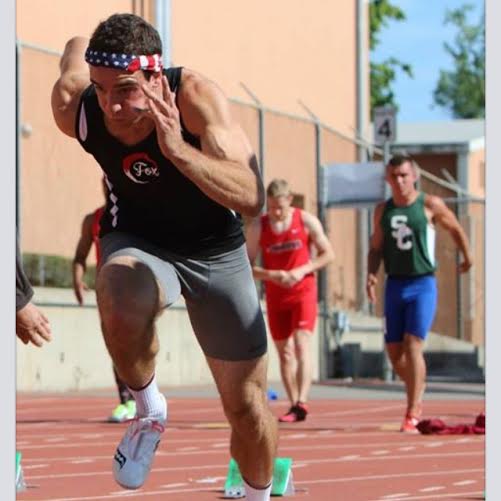 Sophomore hurdler Sam Peters, who has redshirted during this season, practices with the track and field team. Photo courtesy of Samuel Peters

Cardinal and white are known to be the official Chico State colors, and athletes represent these colors on their jerseys while they are competing.

Some athletes choose to be different from the rest and “redshirt” during a season.

These athletes do not physically wear a red shirt while they play, but these players are still a part of the team, just in a different way.

“Redshirting is when an athlete isn’t injured, but chooses not to compete in uniform,” said Janae Mayfield, junior track and field team member. “You are only allowed one season to redshirt.”

Mayfield is one of many who decided to redshirt during this year’s track and field season. She runs the 800-meter, and when the time comes for her to put on a Wildcat uniform, she hopes to be a beneficial leader to the team, she said.

Just because some athletes decide to redshirt during a season does not mean they do not practice along with their teammates. People who do it are required to practice even if they are not competing.

For track and field athletes, the ones who redshirt are allowed to compete at invitationals, but only if they have a qualifying time in their event, Mayfield said.

“The biggest difference between redshirting and competing is gameday,” Barker said. “I did not get to suit up in a uniform with my team and watch from the benches.”

Barker said the reason she chose to redshirt was because of her coaches. They thought it would be best for her because it would help develop her skills and make her basketball game stronger.

For others, redshirting can be difficult. While some athletes might redshirt for reasons like Barker, who is working on becoming a better player, others do it because of GPA.

According to the rules of the athletic department at Chico State, student athletes must hold a GPA higher than a 2.0.

Athletes who think ahead might need to stay five years at Chico State instead of four. NCAA rules state that athletes are only allowed to compete for four years in the collegiate program, so redshirting a season allows these athletes to compete as a senior.

Every athlete that decides to redshirt for a season all have different feelings toward it.

Sophomore track hurdler Sam Peters said that it is harder to compete during a redshirt season because of the different mentality.

“I hang out with my team all the time,” Peters said. “Sometimes, you get low on yourself because it feels like you are doing all this for nothing. It’s tough to stay positive being around everyone that does compete.”

Even though Peters is not competing like his teammates, he said that he is not treated any differently than the other athletes.

He is given the same respect from both his teammates and his coaches.

At the end of the day, athletes who redshirt are still competing in the sport they enjoy doing.

“I think redshirting can be a very positive thing for certain people,” Barker said. “It’s hard to watch your team play without you, but it all comes down to pushing yourself along with your team.”