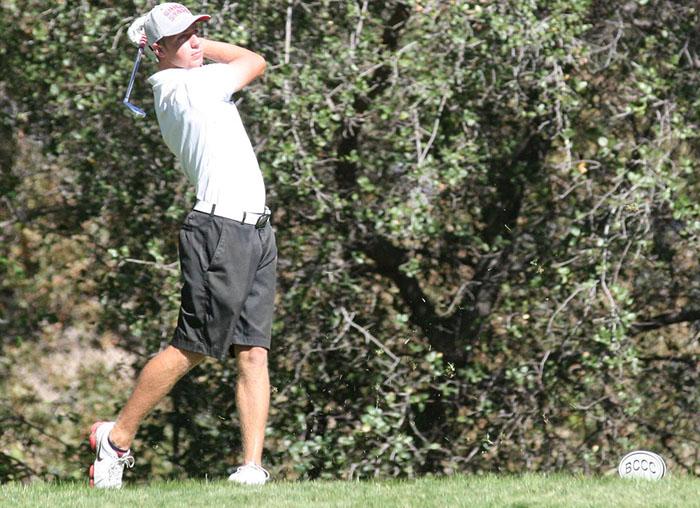 Alistair Docherty tees off in a 2014 tournament. Orion file photo.

There is no “I” in team. Alistair Docherty, a junior on the golf team, always strives for a team victory before any individual accolades are earned. Ranked fifth in the nation for Division II schools, he looks toward playoffs with high hopes.

What has been the key to your success this season?

This season, I think it’s more experience and dedication to getting to the top. I’ve been hungrier than ever to become the best, and I just need to keep working. I know I can get there. Working on the little things and being patient with the process of getting better.

How has what you worked on last season translated into this season?

Last season, I don’t think my goals were set high enough. This year, I changed that. Last year, I really worked hard on becoming better around the greens, and it has been a slow process, but (I) am getting better.

What are your goals for this season?

To win a national championship as a team and as an individual.

If you had to choose one, would you rather have the individual title or team championship?

What was the biggest obstacle you faced this season?

(The) biggest obstacle was probably battling our way back as a team a couple times this spring when we haven’t started out well in tournaments. It takes a lot of focus and is physically and mentally draining.

What do you guys do or talk about when your down in a tournament and need to pick things up?

Fully commit to each shot and to not force anything to happen until you need to. Make smart decisions not only for yourself but for your team as well.”

You finally placed first in a tournament this season. How does it feel to get that elusive win?

Feels great. Been working toward winning a tournament all year, and I’ve put myself in position with one round to play multiple times. The way I won in a playoff was even better. Making a birdie with all the pressure on the line and knowing I can handle the pressure made it that much more enjoyable.

Have you played in a playoff before?

Yes, I have. But not since being in college.

As the season comes to an end and playoffs begin, what do you do to prepare for the postseason?

We prepare differently for each course we are going to play. Regionals is at Hiddenbrooke in Vallejo, and there are plenty of holes that you don’t need to drive off the tee box. Therefore, in practice, we hit more three woods or long irons to be ready for our different game plan off the tee. No matter where we go, we are always working on putting and green-side chipping.

Would you be disappointed with anything other than first for your team and or yourself?

I strongly believe as a team we can win. But in regionals, all we need to do is be in the top five to advance to match play. We will be playing for first. As for myself, I will play my best and play for my team to make sure we get to advance. Yes, I will always play to win, but I will be more focused on the team than myself.”

James Groh can be reached at [email protected] or @James_Groh14 on Twitter.