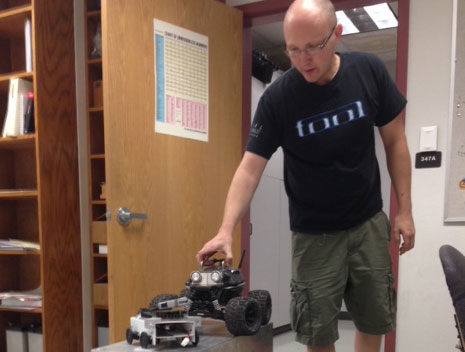 It took seven years for a group of mechatronic engineers to officially become what is now called the California Mechatronic Center at Chico State.

Nick Repanich, director of the center and faculty member in the mechanical and mechatronic engineering department, said the group can now function more like an actual company compared to before.

“Now we can advertise, market and put out things nationwide,” Repanich said.

Chico State is the only university in California that offers an Accreditation Board for Engineering and Technology-approved degree in mechatronics.

At the center, students have the opportunity to obtain firsthand experience under a paid internship with Repanich and his colleagues.

Jason Coates, a full-time engineer at the California Mechatronic Center, graduated from Chico State in 2005 and has been in the group ever since.

The mechatronic program at Chico State used to be a large portion of education but did not provide experience for students to expand their skills, Coates said. However, now with the center, students can gain that experience.

Coates was part of the team before it was recognized.

“It’s nice to be officially recognized,” he said.

The center prides itself on working closely with Lawrence Livermore National Laboratory, a well-known organization that focuses on using mechatronics to improve the safety in military and global defenses.

The center has also made news for its creation of the Multi-Purpose Road-Clearing Robot.

Sultan Al Shneiber, a junior mechatronic engineering major, thinks that the center will be beneficial for students.

“I’ve heard about the mechatronics center, and I think it’s something really great, especially for the students,” Al Shneiber said. “It’s a good way to get that experience.”

Mikey Arias can be reached at [email protected] or @mikey_arias on Twitter.