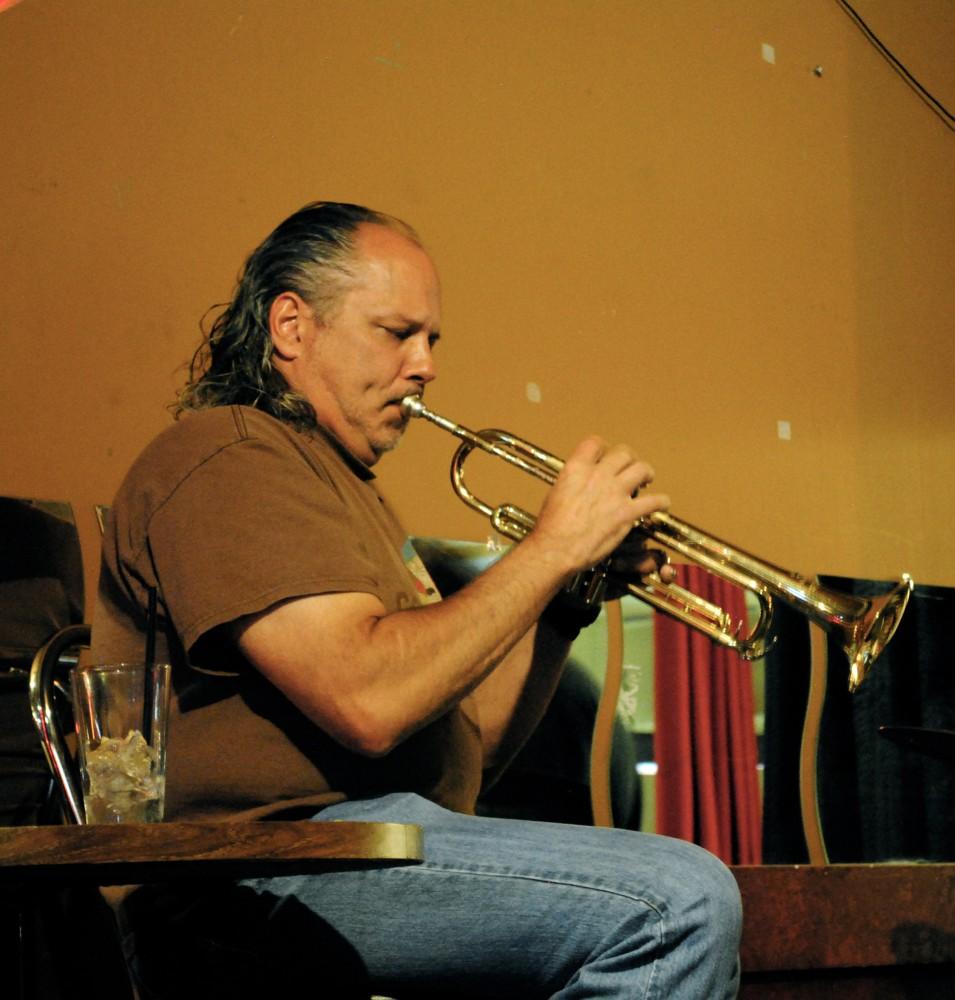 Eyes closed and fingers placed on the valves of his gold Yamaha trumpet, nothing at the DownLo on Thursday nights can distract Chico State professor Rocky Winslow from delivering his trumpet solo.

Winslow has performed at the DownLo sports bar almost every week for five years.

“It’s a good way to keep myself on the edge,” he said. “I work all week and prepare and then I go down and learn on Thursday nights. I use it as a learning tool for myself.”

Delgardo graduated from Chico State in 2012 with a business degree and he said working with someone like an actual professional musician is really enjoyable.

“Winslow pushes all of us to be better,” Delgardo said. “It’s really a privilege to play with him.”

“Each musician is proficient in their instrument and the amount of communication that goes on without having to be said is absolutely incredible,” Hedriana said.

Originally from east Texas, Winslow became a professor at Chico State in 2002.

“They would classify me as the director of jazz studies,” Winslow said. “I teach the jazz ensembles, Jazz X-press and another big band.”

On top of performance ensembles, Winslow teaches “History of Jazz,” “Jazz Improvisation” and a jazz arranging course in the spring.

Hedriana’s is currently enrolled in Winslow’s “History of Jazz” course, he said. He appreciates how Winslow never seems reluctant to be there.

“I think my favorite thing about how he teaches is that he’s not only really really passionate about the subject but he has all the personal experience with playing with all these different ensembles,” Hedriana said.

Winslow holds clinics on campus that allow him to invite guest artists to work with his students.

“To be able to bring in my friends that I know will have a major impact and they think like I think, it creates a bigger faculty even if it’s only for a couple of weeks,” Winslow said.

This October, Brad Leali, alto saxophone player and Winslow’s friend from college, is the guest artist. He will arrive in Chico Oct. 23.

Winslow has played the trumpet for 35 years since he began in the seventh grade, he said.

“I was around music my whole life,” he said. “My dad directed a high school band. Most of the stuff I know about making a band sound good comes from him. He was definitely inspirational.”

Winslow has performed with an impressive collection of musicians including The Temptations and Natalie Cole, however, he’s also good friends with comedian Drew Carey who he met when he performed with the Lon Bronson All-Star Band in Vegas.

“I don’t think I’ve met a nicer person,” Winslow said. “One of my craziest experiences was going to The Playboy Mansion as Drew Carey’s guest.”

It was embarrassing arriving at the gates of the fundraiser in his old beat-up black Toyota Tacoma alongside Lamborghinis but it was pretty funny, he said.

His performance experience and musical background keeps him grounded in doing what he loves — teaching music and performing it.

“I’m not worried about having to drive out to Sacramento or San Francisco to do the rat pack,” Winslow said. “I’d rather be here, practice at home, be with my daughter and perform on Thursday nights or whenever. So many people quit what they do especially because they aren’t in New York and it’s really easy as a professor and that’s the challenge if you love what you do.”

His impeccable dedication has prepared him for whatever direction his musical career decides to go, he said.

Nicole Santos can be reached at [email protected]