Black Fong pumps up the funk at The Maltese 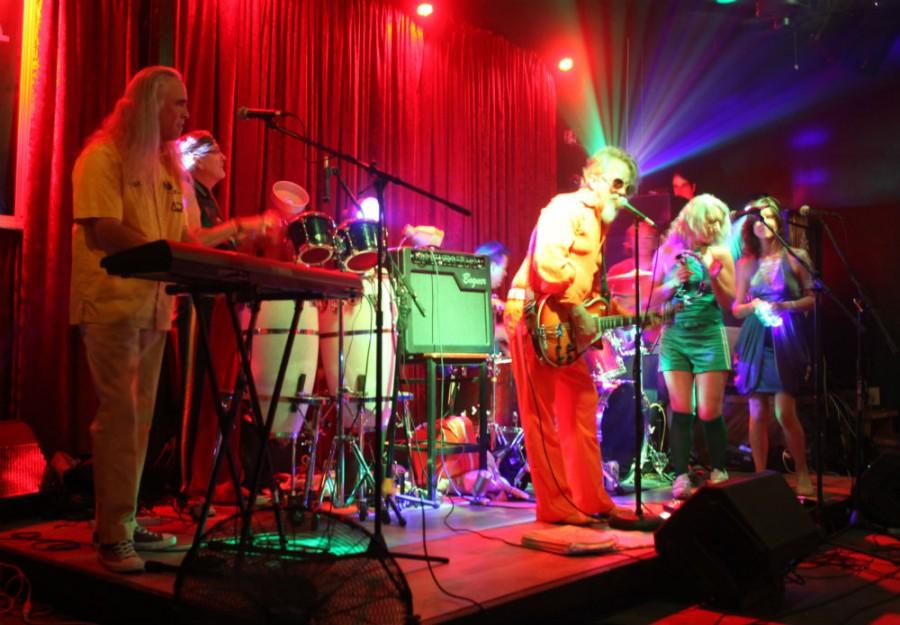 A red curtain backdrop lit up by stage lights cut through every other color on stage when the soulful Black Fong hit the stage for a Pride celebration.

The intro tune kicked off with a dreamy, spacey feel with prominent and clean guitar chords. Lead vocalist and guitarist, Jack Dammit International, approached the microphone with a low and soothing vocal line in a familiar funk style. The chorus vocals then became louder with a rebellious spark fitting for the lyrics.

The bongo player remained busy between his accented hits and occasional blowing of a whistle, which gave the song a surprisingly chilling atmosphere. The drummer kept the rest of the band in constant motion with his persistent ride cymbal.

Two female background vocalists kept their bodies bopping and swinging with the beat and their awesome high pitched range. Their hitting of the tambourine added more then just subtle noise to the band’s huge wall of sound as well.

The keyboardist sang background melodies while lashing out strong chords that gave more of an upbeat groove to the moving genre.

The lead vocal melodies were striking along on certain songs with lyrics that expressed “Bonafide Supernatural” and pushed a fun movement for the dancing audience.

Another song opened up with a melodic keyboard lead that went up and down a scale from high to low, the chorus belting out “Psychedelic Sexy Lady.”

The enthusiastic bass guitarist was always moving his body back and forth to his smooth bass lines that he very rarely had to look down at.

The band’s new drummer, who goes by Scotty G, was not only capable of solid rock drumming, but also intricate jazz rhythms. On one of Black Fong’s more rock-sounding songs, he played loudly with full force. All of the vocalists had screaming powerful lines as well that were synchronized, giving a near chanting vibe.

Jack Dammit International’s guitar solos were all over the place with gigantic note bends on his guitar strings. His lead tones were varied with some very cool echoing sounds as well.

Another song had a chorus that sang “Let It Grow,” which later suggested was referring to marijuana when Jack, at the end of the song, jokingly said, “come on people, we gotta legalize that stuff.”

The night rolled on with great times for the band and the audience. An impressive thing about Black Fong was the length of their set and how well their stamina eased from song to song. This local band is very worth checking out if one is looking for an ecstatic, grooving, happening time.