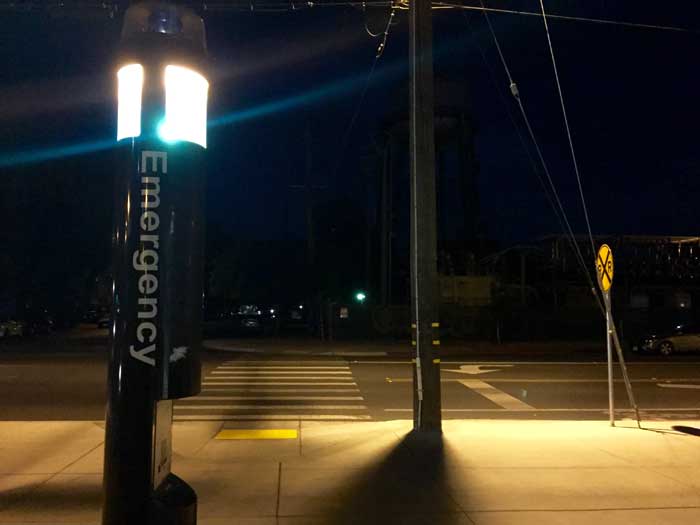 There are 40 emergency blue light phones throughout the Chico State campus to provide security to those who are not feeling safe. Photo credit: Suzy Leamon

A numb feeling crept throughout Mckenna Mays’ body as she looked behind her and saw the man walking at a faster pace. She was near the Wildcat Recreation Center when she noticed the blue light, so she ran to the emergency phone.

The sophomore communications major learned during her first year just how dangerous walking alone can be. A man started following her at 2 a.m. after she left a party alone, but walked away when he saw her threatening to call the police.

“I was praying for a miracle the whole time,” Mays said. “I don’t even want to think about what could have happened if that phone wasn’t there.”

According to the 2014 crime report, a total of 3,647 crimes were reported in Chico, marking a new record. The college is fully aware of the activity happening in and around its school, and is doing its best to protect its community.

With nearly 4,000 new students each year, Chico State wants to make sure every student has access to resources and training that will help keep them safe.

Chico State offers activities and events for students during the day, as well as a tempting party scene at night. Students can often find themselves alone on the streets at night, which make them a huge target.

The phone that Mays found is just one of 40 emergency blue light phones placed throughout campus. 9-1-1 is automatically dialed when the button is pushed and the Chico Police responds instantly.

Mays says what she experienced was truly terrifying, but since then, she makes sure to never walk alone at night.

John Feeney, University Police chief, is also doing his best to keep the students and community as safe as possible this year and for many more to come.

He plans to host meetings every few months for students living in the dorms. The purpose of these meetings will be to help students stay safe if they decide to go out at night and will aim to ultimately create a bond between police officers and students.

“I want students to picture a face when they think of the police,” Feeney said. “We’re a lot more than a badge and uniform.”

He wants to teach students how to “self-police” and look out for each other on the streets during nighttime.

“The students should always walk in groups at night if they decide to go out,” he said. “Also, if they see someone walking alone, they should make sure that the person is OK.”

Another resource that Chico State provides for students is the Freshman Safe Start. This program focuses on helping students with safety issues in a college environment. Topics covered in the program include general safety tips, sexual assault awareness and violent dating relationships. Since 2006, around 9,000 first-year students have been trained with Safe Start.

Chico State’s buildings are also equipped with card access, giving security to its faculty and students. The Campus Emergency Response Team is an organization of staff and volunteers that are trained to help students in any state of emergency on campus. The school is also able to send students and faculty a notice of emergency through text, email and phone.

The numerous resources, techniques and training Chico State possesses aims to give its student body a strong sense of security.

“Chico State is so much more than just a school,” Mays said, “and I love that.”

Susan Leamon can be reached at [email protected] or @susanleamon on Twitter.