Gun control from a different angle 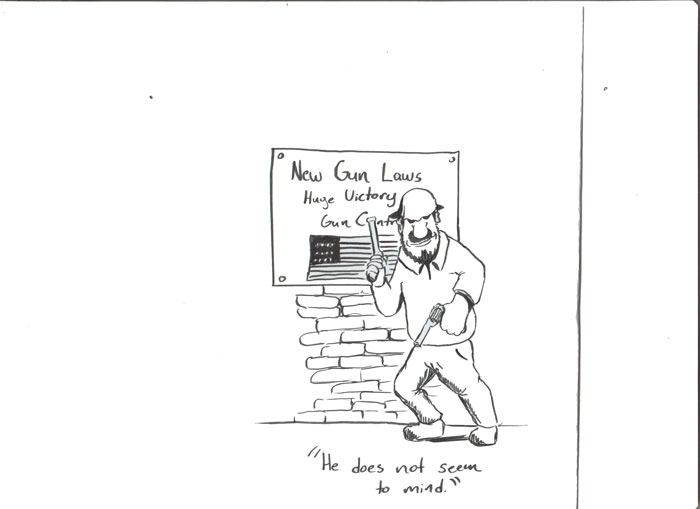 Regardless of gun control, people who want to murder, rob or commit criminal acts will still be able to get their hands on an illegal firearm to get the job done. This scary fact is one of the reasons why I think California is traveling down an unconstitutional path that will hurt the public more then help it.

Now I’m not saying everyone should have, or want to have, guns or that everyone should walk around strapped up because that will “make the streets safer.” Because it won’t. Just imagine a bunch of college kids consuming alcohol and drugs with firearms within reach. That wouldn’t end well for anyone.

Our founding fathers found it very important for the citizens to own firearms and be able to protect themselves from whoever— murders, robbers, corrupt governments— the list goes on.

California, which is the most populous state in the US, has the most strict gun laws in the nation. As a gun owner myself, I would hate to see Californians have to keep abiding by these ridiculous regulations that aren’t doing any good. California needs to revise the regulations before responsible gun owners say, “screw it, let’s move to Nevada,” or even worse, “let’s just get illegal firearms.”

One way I think California could do better is to require some sort of mental screening before anyone can purchase a firearm. There could be a list of certified psychiatrists within the area that could conduct several tests to evaluate if that person is mentally stable enough for a firearm. In the Elliot Rodger incident, all of his firearms were registered to his name. He had multiple counselors and psychiatrists over the years to help him with his disorders and if he was required to get signed off by them for a gun, they all would have said, ”hell no.” But that’s not the case. He willfully walked into a gun store, took a quick firearms safety test, purchased the weapon, then ten days later walked into the store to pick up the gun and went home.

Critics will say that if he couldn’t buy weapons legally, then he would have just gotten them illegally and done the same thing. This is why more people need to be educated about firearms and consider owning one themselves. The only way to stop a bad guy with a gun is with a good guy with a gun, and we need more of those trained and educated good people.

Currently, California assault rifles and handguns are limited to ten-round magazines. Illegal fire arms can feature extendos, which can carry up to 50 rounds. Seems like California wants the criminals to have the upper hand when it comes to home defense. In order to remove the magazine from a weapon in California, a key is needed, which will drastically lengthen the time of reloading. Criminals can just push a button for the magazine to come out and quickly pop another extendo.

Effective in 2015, family members, friends, coworkers or someone who just plain hates you can file for a firearms-related restraining order. This means that if someone “feels” like you are threat to yourself or others, then the police can get a judge-issued search warrant and seize all of your weapons. I find this very scary and unconstitutional because you are guilty until proven innocent, which is apparently not how America works. Of course you can appeal the seizure, but for the police to come and seize all your firearms without notice all based on one person that feels you are a threat is ludicrous, especially since someone can do this out of spite or revenge.

I believe the most important thing to control is who obtains guns. We need to require a mental screening and we need to keep firearms out of bad hands. Mentally ill citizens will have issues getting illegal firearms due to lack of connections and the disorders they deal with, which is why I think mental screenings could help keep the guns out of bad hands and stay in good hands.