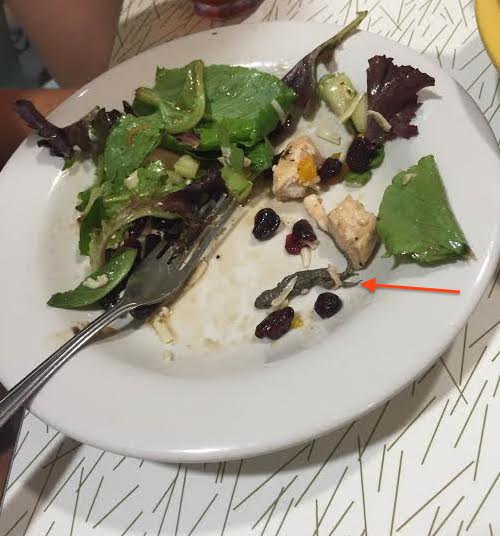 Sutter dining salad with a side of salamander. Photo courtesy of Justin Diruscio

Editor’s note: This story was updated on Sept. 6 to add comments from Sutter Dining.

Justin DiRuscio, first year, had a slimly surprise in his salad at Sutter Dining on Thursday night.

DiRuscio was eating dinner at the dining hall at around 7 p.m. when he uncovered a dead salamander lying on his plate underneath some lettuce, he said.

“I talked to the advisor in the dining hall and he offered me a another salad,” said DiRuscio. “He said he would contact the food services immediately but he continued serving the salad to other people.”

Sutter Dining is known for striving to serve quality food and accommodation to all students.

“Im seeking a way of rectifying the situation because my only sources of eating is the Sutter Dining hall,” he said.

DiRuscio was sitting with friends when he found the dead reptile.

“I thought it was just a bunch of capers,” said Tamari Gurevich, first year.

“The man (Sutter employee) said that this has totally happened before and was not surprised at what had happened,” she said.

Debbie Fairman, Sutter Dining Hall service supervisor, was not present when the incident occurred, but said nothing like this has ever been found in their salad.

“We’ve found like, little tiny bugs,” Fairman said. “But it’s rinsed three times before it’s even put in the bag. So that’s kind of suspicious; we’re thinking that somebody might have just dropped that in there.”

Several Sutter Dining employees were contacted for this story. However, they were instructed not to comment.

Michael Catelli can be reached at [email protected] or @michaelcatelli on Twitter.