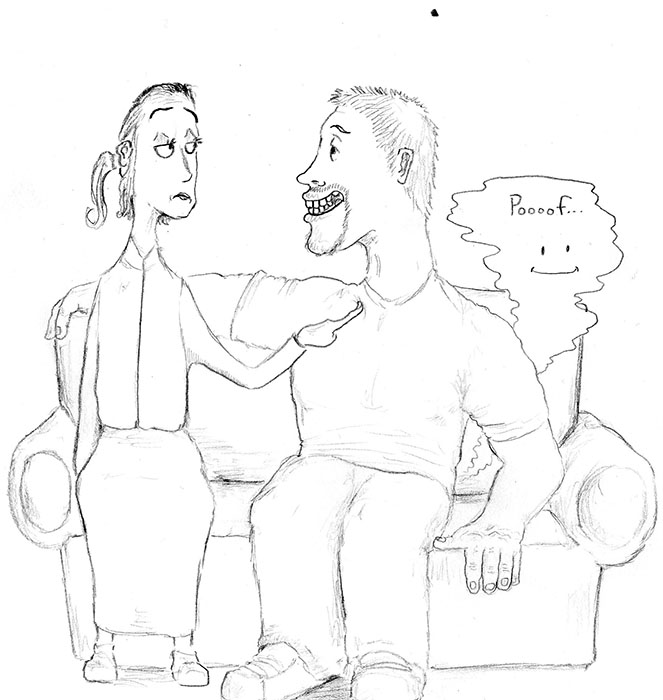 Netflix is on, the mood romantic and the next thing you know your significant other lets out an aggressively loud butt whistle.

Mood killer? My girlfriend thinks so. But farting is a natural body function that sometimes just needs to be let loose.

It goes by a magnitude of names— flatulance, tooting, passing wind and farting. In Western culture, it is deemed as an embarrassing act that should be done in private— but in some cultures, such as the Yanomami Tribe in South America, the fart is used as a greeting. That’s quite a smelly “hello.”

To understand farts further, let us first enlighten ourselves with some fun facts about farting:

Farts are the result of trapped air, which comes from swallowing tiny amounts of air while eating and drinking or from digestive bacteria that breaks down the various foods you eat.The average person, male or female, farts around 14 times a day, resulting in about a half liter of fart stench.The smelly part of the fart results from hydrogen sulfide gas which takes up less than 1 percent of the total gas in your toot.Holding in your farts can be unhealthy and cause unnecessary cramps and pains.If you hold in your farts, they will just be released at nighttime, under the covers. This is a perfect time for the ladies to gain revenge by dutch ovening their partner.

Is farting in front of your partner acceptable? Or is it a reason to question the status of your relationship? These age-long questions remain up to the couple and their comfortability level with one another. I for one, try to keep my girlfriend’s best interest in mind, and move to another room or bathroom when I need to let it loose. But more often than not, I forget and it just slips out, which usually results in a “what the hell” face from her. On the other hand, when my girlfriend lets one rip, I usually think it’s funny and proceed to laugh.

I feel like my girlfriend and I have gotten to a point in our relationship where we aren’t going to bicker extensively at each other for letting our natural gasses pass, but it’s always courteous to excuse yourself and leave the room if you are going to fart up a storm.

If you are in a relatively new relationship and have been clenching to hide your farts this whole time, consider talking to your partner about it. Maybe they have been holding in their farts for far too long as well. It is a natural function that all animals perform, and you should be able to find a healthy medium between you and your partner. Just be glad you aren’t dating a termite!

Nick Bragg can be reached at [email protected] or @theorion_news on Twitter.