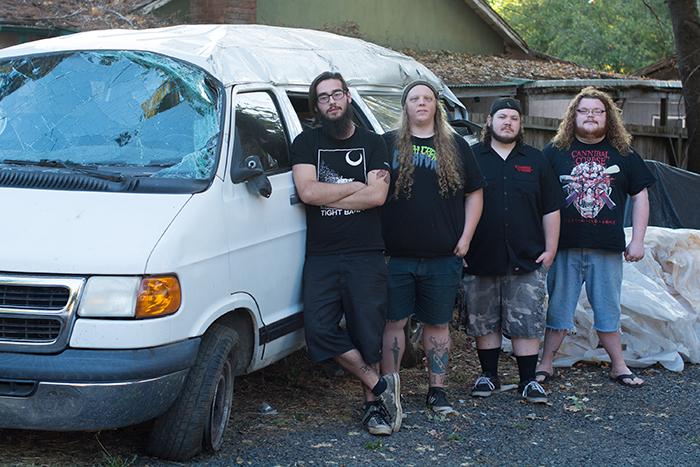 So tell us overall how was the band’s summer? How many shows did you guys play in total roughly?

Jake Hollingsworth: It was ridiculous. We had a tour plan that fell through last minute and managed to put together another one the morning that we left to play in Fresno. We ended up playing 10 shows across the west coast over two weeks in June. We also did a short north state run with our friends, Waves of Leviathan; played Epic Fest 2 and Metal in the Mountains III; played with Psycroptic; added three more dates with our side project, Smak City; and rolled our van. It was eventful.

Ed Vance: This summer was definitely more eventful than we’re used to. Even aside from all the bad luck we’ve hit lately, we played around 24 shows this summer and almost all of them were way rad. So I would personally say this summer was one for the books. We definitely made some social progress as a band.

You guys played a show called “Metal In The Mountains.” Could you tell us what made that event stand out from other shows?

Hollingsworth: Metal In the Mountains is put on by our good bud, Jim from Visidian, and it is the weirdest thing— 300 metal dudes, ladies and their children having a blast all day eating barbecue and moshing in a small town named Dunsmuir off of I-5. We had 10-year-old kid mosh pits who knew all the words to our songs. Those are the best people we’ve met yet playing music. This has been our second year in a row. We look forward to it every year now.

Vance: I’ve always said that the scene up there is Aberrance’s second home scene. Everyone is way nice and they’re all legitimately into metal. It is nuts showing up to this giant park and see 12-year-old kids wearing your shirt and singing along to all the words. It’s surreal.

Your other band, Smak City, got into a major car accident with your van a couple weeks ago on a separate tour. Could you describe how it happened and how it affected you guys?

Hollingsworth: Smak City was finishing our short run with Termanilly ill from Anaheim, CA and was already sleep deprived. We played San Jose the night before, drove back home that night and right outside of Chico at about 5:30 a.m., Tyler, who was driving, nodded off for half a second. We hit the dirt, spun out, hit an embankment and flipped our van twice, possibly three times. Luckily for us, all of our gear was safe and a few drum parts were unharmed. We went home and played the last show at our house that night. It really didn’t affect us all that much, other than our van being destroyed. We made jokes literally three minutes after we assessed that all the humans in the vehicle were alright. Our drummer even went back to sleep.

Vance: I mean I would be lying if I said I wasn’t slightly PTSD about cars now but mostly I’m more driven to pursue this music thing. Something about overcoming odds brings you closer to your friends, band mates or collective.

What is the best and worst thing about touring?

Hollingsworth: The best part is meeting new people, I think. Most of our shows on this summer tour were to complete strangers. The worst part is playing bad shows. You tend to beat yourself up about it and it really sucks when there’s more than one in a row.

Vance: The best thing about touring, for me, is you don’t have time to be an average person with average problems. You’re so wound up with getting to the city, unloading, playing, loading, then leaving to be worried about your PG&E bills or that oil change you’ve been forgetting about. The worst thing is the smell, which I can live with. Also the claustrophobia, which I sometimes can’t live with.

What was one of the funniest moments during Aberrance’s tour?

Hollingsworth: There was one lady in Fresno who wanted us to sign her black shirt with a black marker. She was wearing a shower curtain as a cape and singing a song about hallucinogenics. We think we are hilarious so there is plenty more. But that is what stands out.

Vance: That’s a hard one. There’s been way too many and all the good ones are too inappropriate for the news. There was this one time that I started flapping the van’s side window like a mouth and yelled at cars on the road in an east coast accent saying, “Do you like Linkin Park?”

What does the band have going on for the next couple of months? Are you guys working on new material?

Hollingsworth: Well the van thing means we really don’t have a choice but to stay at home and write. We are planning on releasing a full-length sometime down the road and we are five songs in currently. We are going to book some local shows and hopefully finish writing the whole album thing by the end of the year.

Vance: This new stuff we’ve been coming out with sounds like Hell’s soundtrack so I’m very pleased so far. Once that CD’s out you can bet we’ll be back at it driving around the states some more. We’re looking to have a new means of transportation by the winter.

Any last words you guys would like to say to the readers and fans?

Hollingsworth: We like you in a “like, like” kind of way. We think you are cute and you should go to our next show on Oct. 30 at Lost on Main with From Hell.

Vance: I’d just like to say thank you personally. Aberrance went from being the weird-sounding garage band to one of the most-watched bands in Chico. And that’s all from people physically going and seeing us at shows, which I think is way rad. We wouldn’t be still going after four years— seven for the other guys— if it wasn’t for the immense love and support we’re shown from the Chico scene and our brothers and sisters in the RDC (Red Dirt Crew). Many local acts don’t realize how spoiled they are with our scene because we’ve seen other scenes and they’re almost never like Chico.