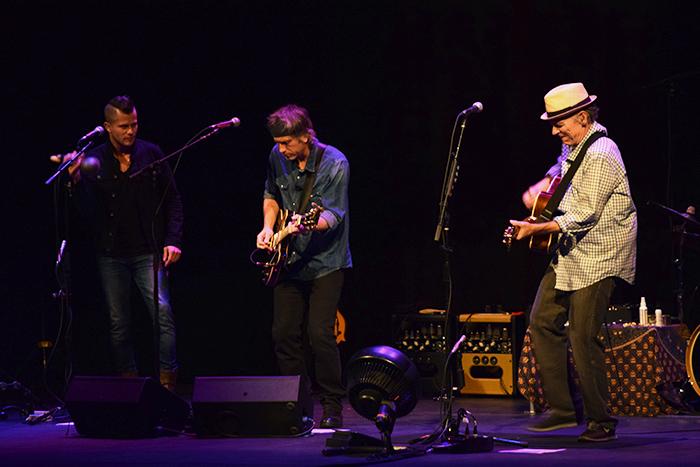 The lights dimmed and out walked the 73-year-old Taj Mahal with his two bandmates right behind him. The audience cheered for the blues legend as he gave a warm and friendly wave to all.

Mahal sat and grabbed his bronze resonator acoustic guitar, tested it for a split second and then seamlessly went into his first song as the drums kicked in.

The audience cheered, swaying with friends and loved ones to the sound of the blues.

Once the first song was finished, Mahal looked down and mumbled in his harsh voice, “Alright, well let’s get on the dog and give the dog a bone.”

The Taj Mahal Trio’s next song was brighter sounding with a lot more melodies. Mahal described to the men in the audience, “Now you gotta sing this to your lady every day.”

The grooving “Queen Bee” had a smooth, catchy chorus that sang, “Oh she rock me to my soul, love me to my soul.”

Mahal’s setlist also featured a bluesy song titled “Sitting On Top of The World”— A song so familiar to the fans that every time the chorus came around, he stopped singing to let the audience take over.

Halfway through the set, Mahal welcomed blues legend Lazy Lester to the stage. Lester played harmonica and improvised solos to many of Mahal’s songs. After performing a few songs, Lester told the audience he currently lives in the hills of Paradise, California. I thought it was extraordinary that a blues legend lived so close to Chico.

After about 45 minutes of playing, the Taj Mahal Trio ended its set which created a huge applause from the crowd leading up to John Hiatt.

When John Hiatt came onstage, the audience grew even louder. His first song was a soft rock tune.

Behind the famous singer-songwriter was a drummer, a bassist (that also played an electric ukulele bass), a talented lead electric guitarist and a background singer whose harmonies were fantastic in the high note range.

The song that stood out was “Cry Love.” The song opened with the lead guitarist who later switched to a mandolin. The song had great rhythm which the audience really thrived for. The chorus never got old.

Hiatt’s song, “Real Fine Love,” featured excellent background vocal harmonies. Although the song was slow-paced, it still had powerful elements and blues vibes within it.

“Have A Little Faith In Me” was a sad song, but good. The song picked up toward the end when Hiatt belted out a high scream for a mesmerizing 20 seconds.

The song that closed the show was more rock-sounding, and the crowd clapped for a long duration when the band took its bow together to end the special, rocking evening.