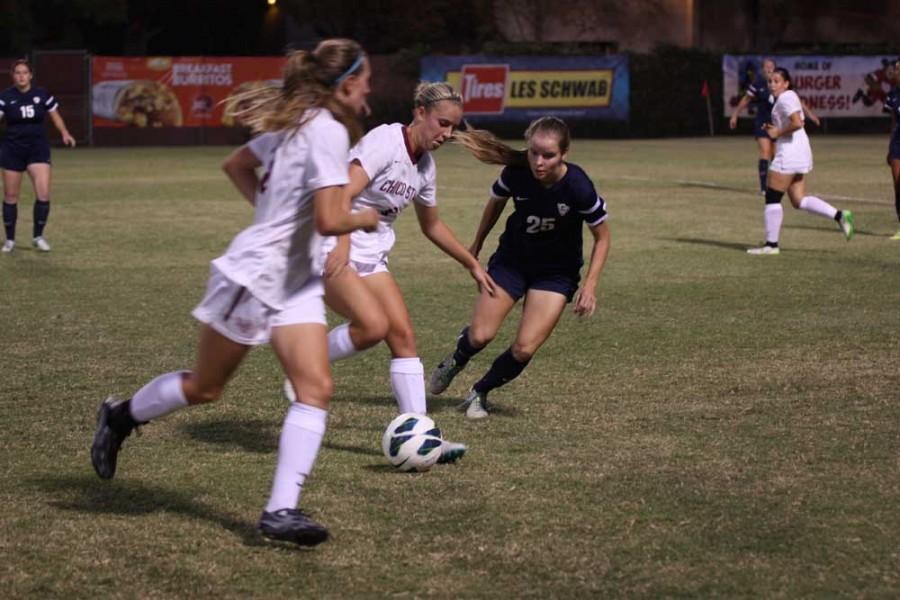 With the win, the Wildcats improve their record to 3-1-1 while the Lancers drop to 0-4-1 for the season.

Chico opened the scoring up in the 11th minute of play when first-year midfielder Carlie Reader played in a cross to the far post that was volleyed in by senior forward and midfielder Nicole Roberts for her first goal of the season. The ball had excellent placement and Lancers’ goalkeeper Sara Escobedo had no chance of stopping the shot.

Neither team would score in the first half after the 11th minute goal by the ‘Cats, but the game was open and highly contested. Heading into halftime, Chico State managed to get six shots while CBU had four. The Lancers forced Wildcat goalkeeper Mackenzie Boulton to make four saves in the first half.

Chico State’s head coach, Kim Sutton, said the team could have done better in the first half and was not too pleased with the team’s performance despite being in front.

“I felt we didn’t take advantage of a team that is a little down on their luck right now and had some lumps and tough losses,” said Sutton.” I told them you’re going to have to want this game more than they do, and come out and be a whole lot sharper and take advantage of the mistakes they’re making in the back.”

The Wildcats would waste no time in responding to Sutton’s halftime talk. Ten minutes into the second half, sophomore Pooja Patel set up junior midfielder Lindsey Dias for Chico’s second goal of the game. Patel beat two defenders with a bit of skill and then placed a pass that Dias converted from 12 yards out to the upper half of the near post.

“Pooja beat two or three players on the dribble and she was able to look up and find me with her through ball,” said Dias. “I felt pressured but I looked up and saw an open net, so I placed it there.”

Dias was not done contributing to the Wildcat victory. Just five minutes after scoring her own goal, Dias would assist first-year forward Brianna Bengivengo in scoring her first goal of the season. Bengivengo scored from 14 yards out after a diagonal pass from Dias to the top of the box. The Chico State Wildcats led the Cal Baptist Lancers 3-0 after the goal, but the scoring was not over yet.

With a comfortable 3-0 lead, Chico State only had to see out the final minutes of the game. However, the best and fourth goal of the game was scored by Shelby Lanksbury after she blasted in a shot from 30 yards out into the upper right post after one of the Lancers’ defenders turned over the ball. The goal was Lanksbury’s second of the season.