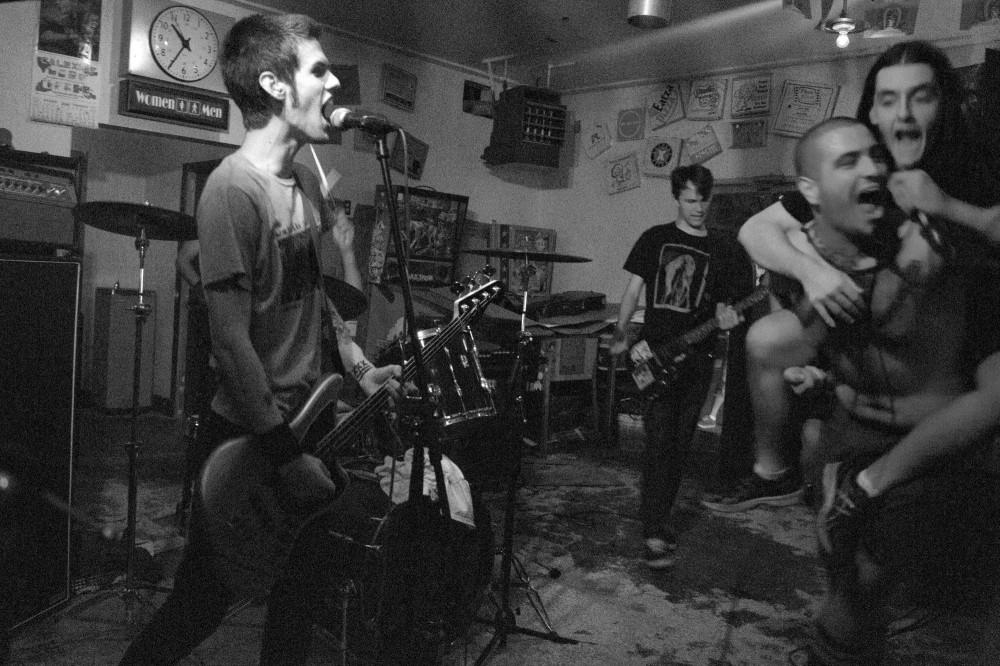 (From left) Bryan, bassist; Miles, guitarist and Tommy, lead vocals with support from the drummer of Tri-Lateral Dirts Commission perform their most popular song, "Get Hurt/Burn Out." Photo credit: Grant Casey

On Thursday night, more than 40 people came to enjoy drinks, interactions with fellow musicians and friends and moshing to the heavy sound of punk and other forms of extreme music. A side note though, ironically pizza was not available due to the oven not working accurately but is said to be fixed now.

The opener was local 3-piece band, Tri-Lateral Dirts Commission. They had an uptempo, aggressive sound. The guitarist had extremely fast picking and dissonant sounding chords throughout a majority of their songs.

All the members of the band sang at some point, even screaming in sequence as well.

The audience gave back to the band by moshing in a circle while kicking up sawdust from the ground that is throughout Monstros.

The next band that hit the stage was Leucrota.

Overall, they represented a much heavier sound. The size of their guitar and bass amps were enormous. The music was so loud that the ground vibrated my body, which seriously messed with my equilibrium.

One listener in the crowd reacted so strongly to the next band, Sloths, that his whole body would shake and fall to the ground ecstatically. The most intense song of the night was their last song. The vocals from all the members kept going at the same time with great anger, and the riffs kept chugging relentlessly until all of sudden, it came to a halt.

The last band of the evening was Criminal Wave. They were probably the most passionate band overall when it came to their stage presence. What made their sound stand out from the other bands was that they had more of a skate rock or skatecore sub-genre vibe.

The guitarist, bassist and singer all jumped high in the air and landed on the downbeat together right when the song picked up with more energy.

A song that stood out was called “Park Pig.” A fan in the audience shared the microphone with the vocalist on a certain part, and the moshing kept going. The song was only about a minute but still showed talent and strong emotions.

The show as a whole was awesome to witness. The unity of the crowd, the laughs, the good times, the moshing, all came out to sweaty people, uninjured, enjoying the culture and dedication of hardcore music.