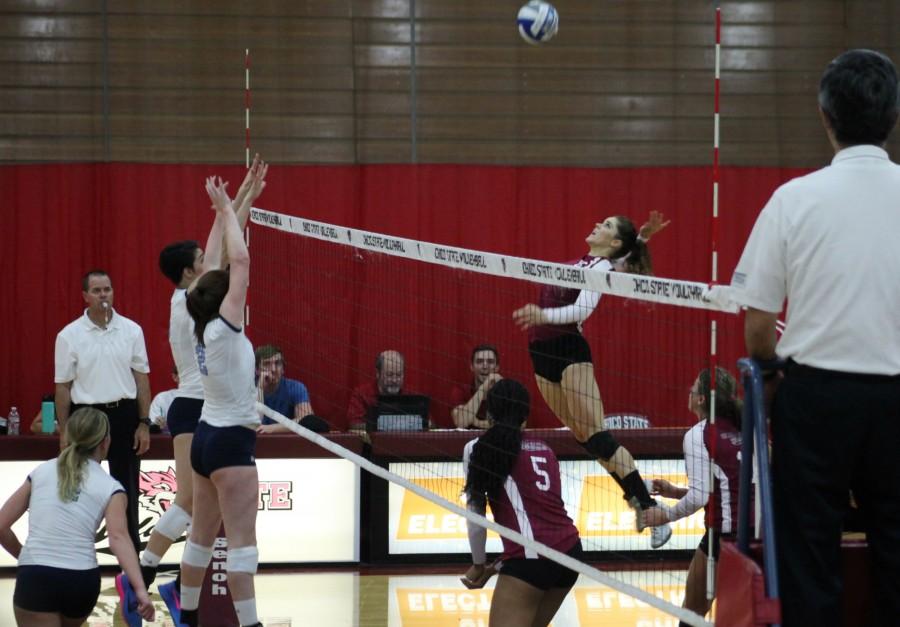 Perhaps some nervous jitters were present for the host ‘Cats in the first set as hitting and serving errors piled up for the home team. Despite winning the most exciting point of the match midway through the set to get the Acker audience on its feet, the ‘Cats fell 16-25. It was the start of a subpar offensive night for Chico State as the team complied 22 hitting errors compared to Sonoma State’s six.

The second set was more competitive with the ‘Cats taking an initial 5-3 lead. The set was knotted at 15-all before the Seawolves pulled ahead to win 19-25.

Determined to defend their home floor, the ‘Cats kept pace with the Seawolves by trading points early on in the third set. A big run by Sonoma State put Chico State in an 11-18 hole, but scrappy play and a few miscues by the visitors made the score 16-19. However, the ‘Cats couldn’t push past their longtime rivals down the stretch as Sonoma pulled through to take the set 19-25— and the match.

Olivia Mediano led Chico State with 13 kills to go with 10 digs on the night while Ashton Kershner and Anna Baytosh pitched in with seven kills each. Shannon Cotton had a team-high 15 digs and Jacki Kreymborg racked up four service aces plus five digs. Torey Thompson dished out 29 assists and 6 digs.

Head coach Cody Hein said that despite the Seawolves’ big blocking presence at the net, his team can’t be hitting the ball out so much if they expect to win.

“I think it was more of the unforced errors than their blocks,” Hein said. “They did have some big blocks on us tonight, but it was more of us just hitting over the top and out.”

When asked how his team needs to bounce back to face Humboldt State, Hein reinforced the importance of limiting mistakes.

“If we keep making these errors, a lot of teams are going to want to play us. We have to fix our errors,” Hein said.

The ‘Cats look to get back to their winning ways Saturday as they host Humboldt State at 7 p.m. in Acker Gym.

Nick Reddy can be reached at [email protected] or on Twitter @NickIsReddy.