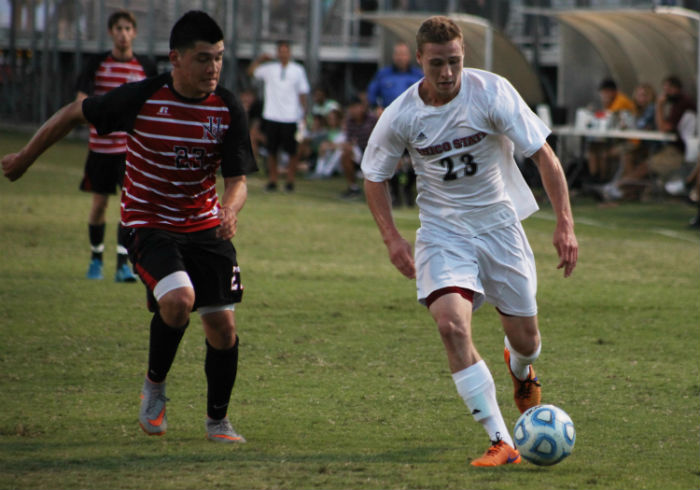 The Chico State men’s soccer team wrapped up its two-game road trip with a 2-0 loss against the Sonoma State Seawolves on Sept. 27.

The Wildcat loss drops their conference record to 1-1-0 and their season record to 3-3-1.

The first half began with plenty of action. For every attacking play the Wildcats had, the Seawolves answered back with a quick counterattack.

Despite the Wildcats’ best efforts, they could not find the back of the net thanks to the play of Sonoma State’s sophomore goalkeeper Mitch North, who prevented what might have been a lopsided game. During the first half, two yellow cards were handed out: one to Sonoma State’s junior forward Armando Coronel and one to Wildcat senior defender Justin Walmsley.

Heading into halftime the teams were tied. But just six minutes into the second half, Sonoma State opened up the scoring.

The first goal of the game was scored by junior forward T.J. Perez who latched onto a pass from junior defender Ryan Rohane, which allowed him to score from five yards inside the box. Rohane was able to place the pass for Perez after sophomore midfielder Josh Sanchez found him inside the box.

The second goal of the game was scored by Sonoma State’s senior forward Brenton Frame, who angled his shot from 20 yards out to the upper right hand corner.

The Chico State men’s soccer team will return home for its second game of the season on Friday, Oct. 2 at 7 p.m. against Cal State East Bay.